Rachel Hundley was named Mayor of Sonoma Monday night in unanimous vote of the five member City Council. Gary Edwards was named Mayor Pro Tem. Madolyn Agrimonti, previous Mayor Pro Tem expressed her disappointment in not being selected as Mayor, but graciously joined in the vote. 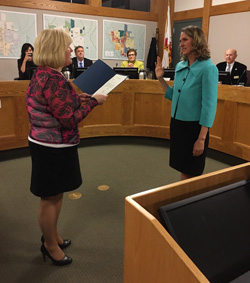 Amy Harrington joined the council after taking her oath of office, administered by City Clerk Carr.

Outgoing Mayor Laurie Gallian was the recipient of praise and appreciation for her eight years of service on the City Council. Her council colleagues and members of the public presented her with gifts, flowers and testimonials attesting to the value of her service to the community.

The newly constituted council then got down to business and moved its way through a full agenda.