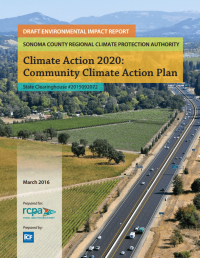 The post-election landscape for climate change policy has introduced an atmosphere of uncertainty, fear and doubt that necessary progress will be supported by the federal government. In Sonoma County, the outlook is brighter for positive action. The onus is now more clearly on accomplishing climate goals at regional levels.

The number one source of greenhouse gas (GHG) emissions is transportation.

Many regional government agencies and non-governmental agencies are pursuing different aspects of climate change. These actors cross a spectrum of county sectors and interests. Business interests respond to cost savings, and there is movement in building energy efficiency. In spite of tensions between different climate action approaches, Sonoma County’s aggregate efforts are far ahead of the rest of the nation.

The Regional Climate Protection Authority has developed the Climate Action 2020 framework, for county municipalities to reduce, by the year 2020, GHG emissions to 25 percent below 1990 levels The state of California, by Governor Brown’s executive order B-3-15, is shooting to get to 40 percent below 1990 levels, by the year 2030. To meet these goals, a lot of work remains.

Jerry Bernhaut, of California River Watch, challenged the Regional Climate Protection Authority’s plans in a California Environmental Quality Act lawsuit, for what he sees as a lack of full cost accounting for county transportation and wine industry GHG emissions. Bernhaut, and others, believe the GHG reduction baselines are not low enough to result in meaningful long-term GHG reductions. This lawsuit has temporarily slowed the momentum for county climate action implementations. There will be a hearing on March 10 to see where the case stands.

The City of Sonoma is doing well. The city council, in a precedent-setting move for the county, and despite Bernhaut’s lawsuit, adopted all 21 climate action local measures, on its own and outside of the Climate Action 2020 frame. The city is in the vanguard of clean power municipalities in the state, by being one of the first to adopt 100 percent clean power for all its own electrical accounts. The city has installed LED street lights for a substantial power savings, and the city and its residents have lots of solar power. The city is hiring a climate intern to help frame and track the city’s climate action plans going forward.

The Sierra Club, with Transition Sonoma Valley’s Tom Conlon, has been taking Sonoma’s example of adopting Climate Action 2020 local measures to city councils across the county and asking them to follow suit. Conlon has also been active in many other ways, including using his energy consultant background in tracking city climate progress and making constructive suggestions to city commissions and departments.

Sonoma Clean Power has a rebate incentive program to encourage electric vehicle (EV) purchases, and EV charging stations. For those interested in 100 percent clean power at their homes or businesses, there is the Evergreen option from Sonoma Clean Power. The Sonoma County Water Agency now uses 100 percent clean power in its water delivery systems. The Water Agency is also a governmental leader in climate resilience, seeking to integrate climate actions into municipal decision-making processes.

Karen Gaffney, of the Sonoma County Ag and Open Space District said the agency “protects land that sequesters carbon and avoids the emissions associated with removing carbon sequestering forests, which accounts for over 17 percent of global GHG emissions.” In sustainability policy, ecosystem services are a way to value functioning ecosystems for human benefits, and for climate mitigation. The District collaborates with the Nature Conservancy in a project called Climate Action Through Conservation, which documents the ecosystem services of carbon stocks in natural and working lands. As an example, Gaffney noted a particular buckeye forest property that stores over a million metric tons of CO2 equivalent.

The North Bay Climate Adaptation Initiative (NBCAI) has a three-pronged strategy to address climate change. One is the development of road maps, or plans of who needs to do what.  “There is an important role for any actor”, said Caitlin Cornwall of NBCAI and the Sonoma Ecology Center. As for the challenges of making climate change relevant, and engaging individuals to act, some level of personal connection, cultivating relationships, and support is necessary, said Cornwall.

Two, is the development of overlay assessment tools to compare different climate change scenarios. These tools are applicable to land owners and managers seeking to understand how climate change will affect their landscapes.

Three, is identifying win-win multi-benefit scenarios that include both climate mitigation and climate adaptation. Mitigation is necessary to stop the causes of man-caused climate warming, and adaptation is necessary as the effects of GHG warming will not abate for hundreds of years. Some examples: local food production, compact infill development, water conservation and re-use, and local renewable energy production.

The Sonoma Ecology Center has been working to develop and roll out a Sustainable Sonoma program. Said Cornwall, “there are so many values that people agree upon.” Sustainability calls for a balanced “triple bottom line” approach that integrates economy, society and environment into all plans and actions. A public forum is planned for later in 2017.

A corollary to strong North Bay environmental and climate protections, and a predominant hospitality industry, is high priced real estate, low wages and an increasingly wealthy demographic that resists diversity and externalizes social equity issues to less wealthy municipalities. With little mass transit and a favored pastoral lifestyle, climate justice is currently not making much headway in Sonoma County. Workers live far away, and have long commutes.

Many of the above plans and initiatives are forward looking and necessary, however getting meaningful public engagement to lower GHG emissions is an issue. While many in the public agree there are serious climate problems, getting people out of their comfort zones to enact change is hard. If as historian Barbara Tuchman said, “people don’t change until the sewage is coming in the front door”, then it is clear that climate change demands a level of action, with deferred gratification, that people are simply not well adapted to realizing.