Under the Sun: Kyle Lely, engineer/paramedic 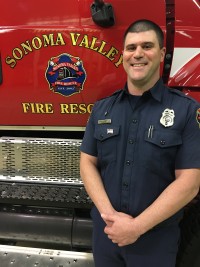 How long have you worked for the fire department, Kyle?

It’s now the Sonoma Valley Fire and Rescue Authority, a consolidated department. I started in as a volunteer 2002 right out of high school, and became a full-time employee in 2006.

And are you a paramedic?

Yes, but my official title is Engineer/Paramedic. That means I also drive the fire engines. So I’m a firefighter and a paramedic.

The City of Sonoma used to have its own fire department. What changed?

Sonoma’s department merged with the Valley Rescue Authority. There are now three full-time, fully-staffed fire stations, plus one volunteer station. The largest station, #1, is here in Sonoma, #2 is on Center Street at Arnold Drive, #3 is in Agua Caliente on Hwy 12, and #4 is the volunteer station located within Diamond A. All the stations share resources and personnel as necessary. This unified approach benefits everyone.

Tell me about yourself.

I was born here in the Valley, and grew up downtown. I attended St. Francis and then Justin Sienna. I’m married and have we have two sons, now two-and-a-half and one-year old. Our family recently moved from a condo here in town to a house with five acres that my grandparents owned in Schelleville. The boys love it.

Did you always want to be in the fire department?

Nope. I wanted to be a pilot, and I even took flying lessons. My mom suggested I volunteer for the fire department, and that’s how it happened. I love my job, and it’s a busy one. We respond to house fires, of course, but also vehicle accidents, vegetative fires, hazmat incidents, and offer plain old public assistance – falls or someone locked out of her home. We like to say “for the person who calls 911, it’s their worst day.”

Sure. Some of us were sent to help fight the Rough Fire in Calaveras. We were assigned to protect two structures, but the fire moved quickly and though we had a truck we were almost overtaken by flames. In the end, we did save the houses.

How about medical situations?

I’d say about 70 percent of our calls are medical. Sometimes we take patients to the local hospital, sometimes we are directed to other hospitals; it depends on the nature of the medical problem. Having a local hospital is invaluable. Strokes, for example, must be treated within a fairly narrow window of time for TPA to be administered to break up a clot. Transport takes up valuable time. Where we go is a matter of county policy governing trauma.

You’ve lived in the area your whole life. Any thoughts about change?

It’s a lot busier now, more stores, cars and people. The community is older, wealthier and I think with fewer kids. Many of the houses are now second homes, and empty much of the time. Things have changed.

Where do you go from here?

This will be my life-long career. I’m not leaving. Over time I hope to move up to the position of Captain. In general, there are not a lot of openings in the department. For the vast majority, careers begin and end here. We’re a very local department, and like others, I’m home grown and want to stay.