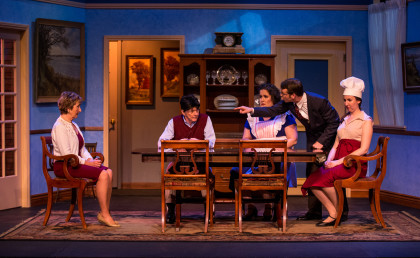 In “The Dining Room,” in its opening weekend at Andrews Hall, six actors portray dozens of characters – from children and teenagers to adults and grandparents, over 50 in all – in a flow of personalities, costumes and hairstyles. The one constant is the dining room table, around and at which the many vignettes – comic, wry, serious — play out. 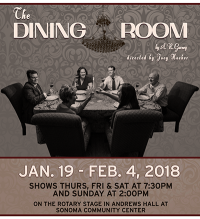 The talented cast provides a glimpse, from many angles, into the world of the privileged upper class. The playwright, A.R. Gurney, made a career of chronicling the decline of old-money white Anglo-Saxon Protestants. “The Dining Room” opened to off Broadway acclaim back in 1982, but the WASPS, the aspiring one-percenters of their day, still have a bit of a sting.

“While Gurney pokes some fun at the culture itself, there is a genuine longing in this play for the sense of stability, comfort and togetherness that the culture provided,” says director Joey Hoeber. “The show is a perfect fit into this season’s theme of days gone by.”

Gurney, who was nominated for a Pulitzer Prize for “Love Letters,” explored similar themes in shows like “The Cocktail Hour.”

“WASPs do have a culture — traditions, idiosyncrasies, quirks, particular signals and totems we pass on to one another,” Gurney once said. “There was a closeness of family, a commitment to duty, to stoic responsibility, which I think we have to say weren’t entirely bad.”

Jaime Love, the company’s executive artistic director, said the play has been a favorite of hers for years. “I’m so excited to be sharing it with our Sonoma audience,” she said. “We have six wonderfully talented actors who play nine different roles each, throughout 18 different scenes, so come and witness their skill!”