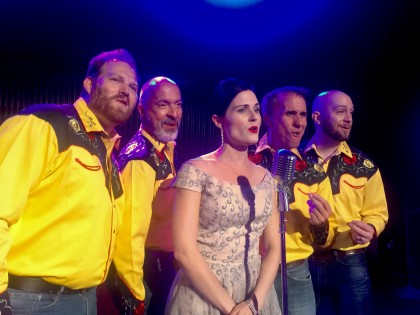 The life and letters of a music legend

Impoverished girl shows talent, gets discovered, makes it big doing it her way and dies suddenly at the peak of her fame. Put to music, the story of Patsy Cline would make a darn fine Country Western tune.

The Virginia native was one of the first crossover stars, bridging the pop and country charts with early 60s hits like “I Fall To Pieces,” “Crazy,” and “Walking After Midnight.” She vaulted from regional performer to national star in an amazing six-year run that ended when she was killed in a plane crash. When she was 30.

“I’ve always had a soft spot for Patsy, and the play,” says Michael Ross, the show’s director. “It’s been a 15-year journey to finally put it on stage.”

The veteran director last worked here in the award-winning “Gypsy,” with Danielle DeBow as the burlesque star. In her he found his Patsy.

“She has a real affection for the music,” Ross says of DeBow, with her low register and emotional depth. “It really sits in her sweet spot.” 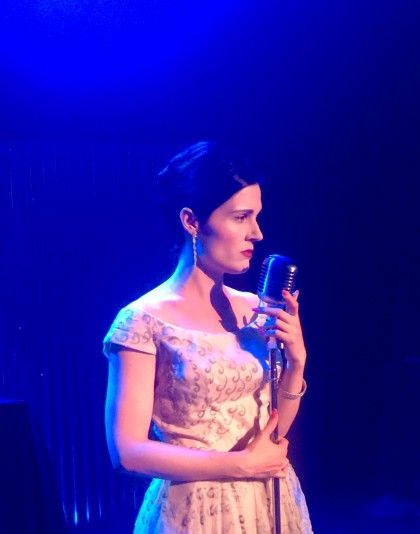 For Debow, “playing Party Cline is a dream.” She finds Cline’s distinctive contralto, with its smooth, often mournful twang, is both powerful and beautiful. As a regional Honky Tonk singer, the young Cline sang in the hillbilly style of the day. But it is was when she developed her own style, with its deeper, truer tone, that she really stood out.

As a child, DeBow herself had a deep voice; she recalls being coached to “sing more like a girl.” Thankfully she resisted, or at least outlasted, that pressure to change. Such a drive served Cline well, and made her a pioneer in the music industry.  She was the first female country music star to lead her own show and band, play Carneige Hall, star at the Grand Old Opry and headline Las Vegas, among other milestones.

“It’s mind-blowing that she could accomplish so much,” DeBow says.

Though it features dozens of Cline songs, the play’s narrative is told through letters between Cline and her biggest fan, a woman who became her best friend and confidante. That role is played by Karen Pinomaki, who says what started with a piece of fan mail blossomed into a friendship cherished by both women. As it grew deeper, the relationship allowed Cline to share the trials and tribulations of her career. “It’s a first hand account of what it was like to be Patsy Cline; hysterical at times, moving at times,” Pinomaki says. 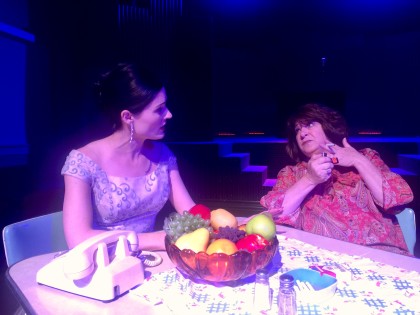 Her role is the backbone of the show. “Karen is the storyteller,’ Ross says. “She does the heavy lifting.”

The conversations between the two are often at a kitchen table set in the middle of the  theater floor. The stories come alive with musical performances, shown flashback style, on the stage. 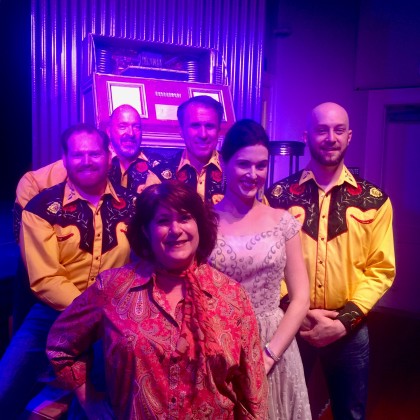 DeBow, singing as Cline, is often joined by a quartet of backup singers — the Jordanaires. The group was itself famous back in the day, lending sweet Southern harmonies to a number of hitmakers, including Elvis Presley.

This version was assembled by Ross. It was a bit of a gamble —  it’s members had never sang together before — but the sound, and the personalities, came together well. Jokes Michael Wells, who happens to be DeBow’s new husband, “the hardest part is remembering when to ‘ooh’ and when to ‘ahh.’”

The musical journey may feature a six-piece band and top-notch vocal talents, but it’s much more than a concert. Says Ross, “it’s a chance to see a person, not just a voice.”