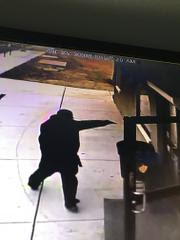 Sonoma County Sheriff’s Deputies arrested a Sonoma man Sunday morning after he pulled a replica handgun on a store clerk and pulled the trigger. Briant Perez Perez , 26, brandished the fake weapon after trying to cash a suspicious check at La Favorito Market.

When the clerk refused to cash the third-party check, Perez Perez became upset, according to Sgt. Spencer Crum. As the suspect exited the store, he pulled out what appeared to be a real handgun, pointed it at the clerk and pulled the trigger several times. It made a clicking noise but not fire, Crum stated.

Responding deputies were able to view surveillance footage of the crime and obtained a photo of the suspect.

A deputy observed a business nearby was called Wine Country Tires. When he entered the business the deputy was greeted by Perez Perez who was immediately cooperative and turned over the check that was made out to his employer.

The deputy arrested Perez Perez and located the replica firearm at his residence, which was to the rear of the tire store. Perez Perez was booked into the Sonoma County Jail and charged with a misdemeanor brandishing a replica firearm and a probation violation. He has since been released after posting $1,000 bail.