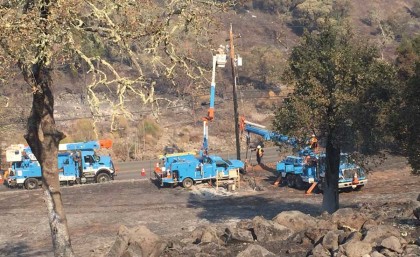 At the one-year anniversary of the fires which burned nearly 200,000 acres and claimed the lives of over 40 people in Sonoma and Napa counties, the cost of rebuilding is beginning to take shape — as is PG&E’s ultimate responsibility to pay for it.

The bills are still coming in, and lawsuits against the utility pending. But State Senator Bill Dodd, whose district was ravaged by the fires, thinks the figure is about $10 billion. His SB 901, signed into law by Jerry Brown, authorizes that much in bonds.

To back those bonds, every PG&E ratepayer, even those outside the fire area, will see a monthly surcharge on their utility bill totaling an estimated $50 per year. The formula calls for an increase of $5 per year for every billion dollars financed, for 20 years.

“It’s too early to say exactly how our rates will be impacted by wildfire related costs,” said Deanna Contreras, speaking for PG&E. “Related to securitized bonds, $5 per year per residential customer for every $1B securitized is a reasonable estimate, but it will depend on the period over which the bonds are repaid as well as the interest rate on the bonds.”

In the immediate aftermath of the fires, blame seemed to be focused solely on PG&E, and the company began a defense on multiple fronts. Because of a legal doctrine known as Inverse Condemnation, PG&E knew that it couldn’t fight any legal battles in court because of the way the language is structured in that particular law.

The law in essence says that even if PG&E did everything it was supposed to regarding maintenance and equipment, as mandated by the state-run California Public Utilities Commission (CPUC), it would be liable — no matter what.

With this in mind PG&E began a media campaign to improve its image. It ran ads profiling how the company interacts with the community. It also ran commercials on how much money it spends on overall maintenance, its equipment, and its program to trim tree branches from around power lines. From 2013 to 2017, PG&E invested approximately $1.6 billion in its Vegetation Management programs to reduce power outages and wildfire risks.

PG&E also blamed climate change as one of the main factors in last year’s fires, something that Governor Jerry Brown has also strongly advocated.

In Sacramento, PG&E lobbied legislators to find a compromise that would allow the company to continue without facing bankruptcy. The legislature and the governor went back and forth with a number or proposals before settling on SB 901. The chief architect of this bill was state Senator Bill Dodd (D-Napa).

The Sun recently interviewed both Dodd and Senator John Moorlach (R- Orange County) to get an overview of the bill.

According to both Senators, the 100-plus-page bill addresses the issue on several fronts. A) It makes it easier for PG&E to engage in forest management including tree cutting and disposal of dead wood and dry brush caused by the recent drought. B) Working alongside the CPUC, PG&E will begin the preliminary process of designing underground power lines. C) A financial “stress test” will be conducted to determine how much PG&E can pay without causing it to go into bankruptcy and cause its stockholders, many which are elderly and depend on a limited return from these stocks, to continue to invest.

Senator Dodd suggested that SB 901 will allocate approximately $10 billion in the form of bonds that will immediately be available to plaintiffs suing PG&E. For their part, ratepayers will be assessed that estimated $50 per year surcharge.

With over 200 individual lawsuits and virtually every city, county and municipality affected by the fires engaging in their own lawsuits, the assumption from Senator Dodd is that $10 billion will be enough to cover all costs.

But it does not address overruns, and it is far from exact.

One of the cities suing PG&E is Santa Rosa. “Honesty I don’t know, as the city is still assessing how much damage the fires caused so at this point there is no price tag,” Assistant City Attorney Adam Abel told The Sun.

To complicate state budget matters, SB 901 does not address claims in connection with lasts year’s devastating fires in Southern California. Or more recent fires in Redding and beyond.

As noted, all PG&E customers will chip in with that $50 fee — no matter where they live.

Diana and Doug Gill, visiting Sonoma from Livermore recently, say the situation is frustrating. They understand that someone has to pay for the overall costs but are demanding more answers. Diana questioned not just the cost of the fire but the cause, as she doesn’t believe that a fire could have spread as rapidly as it did. Like many, she questions if there is a missing element that hasn’t been made public.

SB 901 was signed into law on Friday, September 21. Brown, whose term is ending this year, has said that long, epic fire seasons will be the new normal in California. How to pay for them remains the question.

A plausible possibility is a bill that didn’t pass, but could come back in the next session. AB 33, introduced by East Bay Assemblyman Dr. Bill Quirk (D-Hayward), would have also issued a series of bonds to expedite payments, but had no ceiling price cap. The bill would authorize as many bonds as needed — $50 billion or more was a number mentioned by Quirk’s office.

That figure may have been too high for an election year, but the 2019 legislature might reconsider such an option when the costs of fighting more recent fire disasters come due.