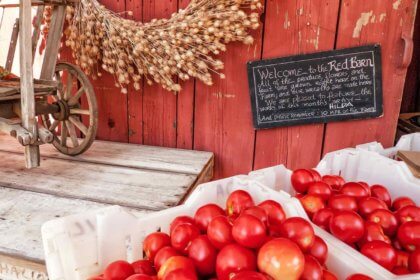 For thousands of years, indigenous tribes managed native food crops such as acorns, berries, shellfish, and wild game in the Sonoma Valley.  Spanish settlement brought cattle and other livestock as well as traditional European crops, such as wheat, barley, legumes, orchard fruits, figs, olives, and the now ubiquitous wine grape. The mild year-round climate of the Valley, coupled with the mineral rich clay soils – and “captive” labor force of native tribes – allowed for abundant harvests.

Expansion and conquest led to increased intensification of agriculture in the Sonoma Valley. Large fields of cattle and sheep supplied meat, hides, wool, and dairy products. Eggs, poultry, walnuts, grains, olives, potatoes, and other vegetables, and a large variety of tree fruits were in wide-scale production, feeding at first the Gold Rush population of the Sierras and San Francisco, then the larger Bay Area and markets beyond. The orchard crops of prunes, pears, and apricots became dominant throughout the 1900s, eventually supplanted by wine grapes over the last 40-plus years.

This brief and incomplete history of Sonoma Valley agriculture leads us to the present day, with much of the orchards and grazing lands gone and supplanted by vineyards or housing and other development. Most food consumed here  is trucked in from the major production areas in the Central Valley, Salinas, Ventura, and from around the world. Chilean apples are now common at the store, as is Chinese garlic.

In this new world order of large-scale agriculture, local food production has become increasingly rare. The cost of land, labor, water, and equipment has consolidated most agricultural industries, leading to the decline of the family farm.  Additionally, the rise of packaged and processed foods has led to a decline in the consumption of fresh fruits and vegetables (and an increase in diet-related diseases and health disorders).

More recently, there has been a positive trend – back toward fresh, organic, and locally-produced food. Farmers markets and farm-to-table restaurants are at the forefront. A slew of books, articles, and movies has increased awareness of the myriad benefits of supporting local agriculture and organic food production: increased nutrition and improved health, a diverse local economy, agricultural land preservation, improved soils, increased food security, and increased community interaction.

It is against this backdrop that we must view our current agricultural scene in Sonoma Valley, where we have a number of small-scale vegetable farms producing on a few dozen acres throughout the Valley. Oak Hill Farm in the northern valley has long been a proponent of farm (and natural) land preservation and organic production. Currently, under management by farmer David Cooper, some 14 acres are in production of fruit and vegetable crops and cut and dried flowers. Their products are available at the year-round Friday Farmers Market at Depot Park, as well as on Saturdays at the beautiful and rustic Red Barn (picture above), on Highway 12 near Madrone Road.

On Arnold, south of Petaluma Avenue, Paul’s Produce, operated by the capable farmer Paul Wirtz, produces 12-plus acres of intensively managed vegetable row crops, which he sells to local and area restaurants and retail at every Friday Farmers Market as well as the Tuesday Night Farmers Market on Sonoma Plaza.

[Paul’s Produce will not operate its own weekly Farm Stand this year. Here’s why. ]

The Patch, located just off the bike path on Sonoma’s Second Street East (with other fields in Santa Rosa), is run by Lázaro Calderón, and grows  an abundance of seasonal vegetables available at the farm stand there, as well as at the Tuesday and Friday Farmers Markets, regional farmers markets, restaurants, and grocery stores.

In future stories, we will look at other farmers and producers in the valley, as well as seasonal recipe ideas.

Seth Dolinsky is manager of the Sonoma Valley Agricultural Cooperative, a program of the Sonoma Springs Community Hall aimed at supporting local farms and food producers using organic methods and ingredients. He is also the owner of New Land Systems, a regenerative land management company.