After 32 years, a new director at Quarryhill Botanical Garden 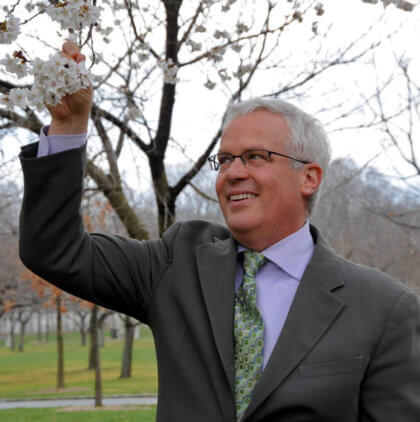 After 32 pioneering years at Glen Ellen’s Quarryhill Botanical Garden, William McNamara will leave some pretty big work boots to fill when he retires in October. Boardmembers of the 25-acre woodland garden and world-class preserve believe they have just the person to do it.

“Following an extensive international search, we are proud to welcome Scot Medbury as the next leader of Quarryhill Botanical Garden,” announced Board Chair Harvey Shein. “For 32 years Quarryhill has thrived under the direction of William McNamara, and we knew Bill could only have been succeeded by someone as renowned in the horticultural world.”

The appointment marks a return to the Bay Area for Medbury, who previously served as Director of the San Francisco Botanical Garden and Conservatory of Flowers before moving to New York City in 2005.

“I am deeply honored to be entrusted with guiding this extraordinary botanical garden into its next phase of maturation and development, as we work to protect and maintain its unique living collections of Asian plants for the coming generations,” said Medbury, who will assume the post in February of 2020.

Medbury, who will assume the post in February of 2020, said he was particularly encouraged by the dedication of everyone involved at Quarryhill in preserving and enhancing the garden in the face of a changing climate.

Medbury has been involved in the curation, cultivation, and interpretation of botanical collections for 40 years, having held appointments at gardens in New York, California, Hawai’i, Washington state, Great Britain and New Zealand. For the past 14 years, he has served as President and CEO of Brooklyn Botanic Garden, where he led a $124M capital campaign that has transformed that garden for its second century of service.

Prior to moving to New York, Medbury was the director of both the San  Francisco Botanical Garden and the San Francisco Conservatory of Flowers, where he oversaw a $25M historic restoration that returned the Conservatory to being one of San Francisco’s most beloved attractions.

He currently serves as Chair of the New York Coalition of Living Museums, on the governing boards of the Center for Plant Conservation, Botanic Gardens Conservation International-US, and the International Dendrology Society, and is an advisor to five American public gardens, including Quarryhill Botanical Garden, where he is also a past Trustee.

Medbury holds two degrees from the University of Washington in Seattle: an MS from the UW Center for Urban Horticulture; and a BA from the Jackson School of International Studies.

As executive director at QBG, he will oversee one of the largest collections of scientifically documented, wild-source Asian plants in North America and Europe, many of which represent ancestors of horticultural favorites found throughout the western world. A world-renowned botanical institution, the Glen Ellen expanse hosts other botanical gardens, arboreta, researchers, conservationists, students, and the visiting public with living examples of the beautiful and threatened temperate flora of East Asia.

Quarryhill is not only a modern-day ark of rare and beautiful plants but also a place for picnicking and peaceful recreation, where education and conservation are at the heart of its mission and run as deep as the tranquil ponds and seasonal waterfalls that surround it. In it 32nd year, Quarryhill Botanical Garden is one of the most exotic and biologically diverse places in Sonoma Valley.