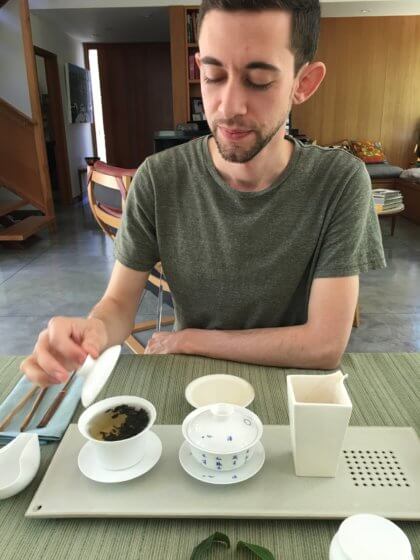 You were brought up in Sonoma, right?

I was born right here at Sonoma Valley Hospital in 1994, and spent my school years here as well. I attended the Sonoma Charter School and then graduated from Sonoma High. I was the student body President in 2011-12.

But then your education took an unusual turn, I understand.

Well, you could say that. I took a year off after graduating high school and was selected to join a program created by the U.S. State Department, a National Security Language Initiative to develop a generation of culturally literate youth. We were given a choice of seven languages. Because I chose Chinese, and have always been interested in Asian culture, I ended up spending a year in Taiwan in a Mandarin Chinese language immersion program. No English was spoken in the classroom-based program, and I lived with a host family and took field trips. Within three months, I spoke at a survival level, and after ten I had mastered an intermediate conversational level, both reading and writing Mandarin. This is also the time I was introduced to Chinese teas and the tea ceremony by my host family “brother.”

But after that year, then what?

I then went to Abu Dhabi to attend a four-year college created by New York University but funded by the government of Abu Dhabi, part of the United Arab Emirates. A friend of mine a year ahead of me in Sonoma had enrolled, and I applied and was accepted while in Taiwan. I spent 2013-17 there and graduated with a Bachelor of Arts in film and a minor in East Asian studies. I had 150 classmates, and had the chance to travel to India, Florence, Turkey, the Philippines, Switzerland, and Qatar, among other places. Now my younger brother is enrolled there.

Let’s get back to tea.

Tea is still very popular in China, though millennials are gravitating towards Starbucks coffee. For those interested in tea, though, it’s amazing. I did a report on Chinese tea while a freshman at Sonoma High, where it all began for me.

All teas are derived from one type of plant, Camelia Sinensis. The variety in Chinese tea – and there are six categories, Oolong, Black, Green, White, Yellow and Puerh – are all created through varying methods of processing, microbial fermentation, and/or oxidation. Puerh is collectible, and an auction of seven 100-year-old “cakes” of Puerh, 2.5 kilograms in total, sold a couple of years ago for $7.2 million. The other factors influencing the taste and quality of tea are, like wine, related to its “terroir.” Regional differences, altitude, topography, sun and shade exposure, harvest season, and so on all play a role. Ordinary commodity tea, the kind in tea bags, is chopped up summer harvest. Premium tea is always whole leaf.

Tell me more about the tea ceremony.

The Chinese ceremony is not like the Japanese one, which is more ritualistic. The Chinese ceremony is more about the brewing process, and the proper way to produce the best flavor. So, there are three basic vessels used: the brewing vessel of a small tea pot or a covered bowl called a “gai wan,” a pitcher called a “cha hai” meaning “tea ocean,” and finally, the tea cup, “cha bei.” The tea cup is intentionally very small to focus attention on the flavor of the tea, not its volume. No milk, no sugar, no flavorings, ever.

And has tea become your career?

It’s too soon to say that, but I’m employed by the Red Blossom Tea company in San Francisco, where I’m a tea specialist at their shop and do their video production. I traveled to Taiwan and mainland China recently on a buying trip, sampling different styles of teas; I had the chance to speak Chinese there again. I do admit to feeling the travel “bug” and would love to live in Taiwan someday. For now, I’m still living in Sonoma, and am developing a program to offer tea education and tasting to those with interest locally; I can be contacted through BenMarcusWillers.com.