Life at the Improv 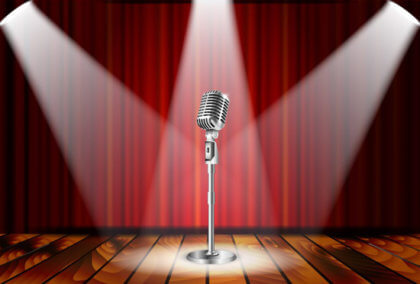 Welcome to the I Am Larry Barnett Show. I’m your host Larry Barnett, and like you, I’m making it up as I go along. Hey, this is The Improv, right?

I know, you’re going to tell me you’re busy starring in your own show, and coming up with your own material moment to moment, but here I am, at least in the form of words on the page, and somehow or other your show now includes me. Now how cool is that?

It’s not like I got in touch with you in advance and asked if I could have a part in your show, like called you on the phone and introduced myself and asked if I can join your show. Nope, it turns out that my show and your show overlapped each other, and here we are, co-starring in a combined show, at least for the moment.

Actually, you are not in my show yet, or if you are, I don’t know it. My show includes sending written information into the world in both print and digital form; it’s how I play my part, or at least how I’m playing it for now. Like I said, I’m making it up as I go along.

I could change my part, write a new script, abandon my role entirely; it would, of course, make for a rather chaotic show, a real drama I suspect, filled with strong emotions. And all the other shows with which I overlap would have to change their scripts too; that’s the nature of The Improv.

Some people who end up in my show are great at improv; others, not so much. Everyone does improv all the time, but many people in their own shows tend to forget they’re playing a part and begin to believe the character they’re playing is actually who they are. Rather than playing, they begin to take their show very seriously, and demand others take it very seriously, too. This is called “getting lost” in your character, and it makes for dramatic entertainment but also a lot of confusion and turmoil.

As if acts of continuous improvisation were not challenging enough, some people go off plot and intentionally create imaginary stories and wacky scripts just for the purposes of entertainment. In their shows, they play actors pretending to be authentic people playing improv, and hope others will forget its all imaginary. It’s easy too see how all this just adds to the confusion, I’m afraid. Sorting out the real improv from the imaginary ain’t easy and can be downright dangerous.

The worst kind of entertainment is the completely predictable kind, the kind that corporations like us to play, particularly the role of consumer. Corporations are not actually a real people. I’m not saying real people don’t play roles by working at corporations, but what I mean is that a corporation does improv too, but in a very deterministic way. Corporations are terrible at making it up as it goes along, and need stable, predictable scripts to keep their plot lines working profitably. So, they spend tons of time and resources convincing others to join the corporate show and add branded consumer products to their own shows. We call this “product placement.”

I didn’t mean to get into all this, by the way, but hey, it’s The Improv. And thank you very much; you’ve been a great audience.