To Peru with love 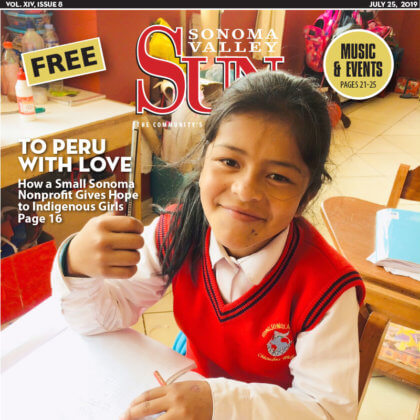 “A disheveled and desperate young woman, worn out and old well beyond her years, approached me on a Cusco street holding out to me her swaddled newborn. She was offering her tiny baby to me, speaking softly in Quechua, her mother tongue, and I didn’t understand one word. But I understood and felt her heartbreak too well, a mother myself, and I silently thanked my creator for my blessings. Her eyes were clouded and too dark – dead eyes under a furrowed brow. She was beyond tragic in her desperate cry for help. Her dilemma broke my heart and it changed my life then and there. I did not and could not take her baby, but I could do something to help the thousands of abandoned kids on the street.”

As recalled in her new book, Jump on the Love Train, that moment changed Rae Lewis’ life. She was inspired to begin the Chicuchas Wasi (CW) Organization in 1987, dedicated to serving children in Cusco, Peru who were desperately in need. Abandoned and living on the streets, the children, some as young as six years old, were barely surviving. 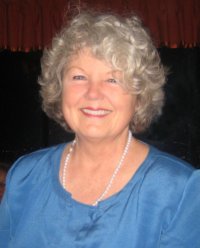 Lewis was born in San Francisco, raised in Sausalito, and settled, with her husband and three sons, in Sonoma. She was a registered nurse, and had worked in Real Estate. Now she was moving to Peru, where she’d spend the next 10 years building the CW organization and shelter.

“We created a safe home environment and filled it with kids dangerously at risk on their own. Chicuchas Wasi taught them and provided good nutrition, food preparation, health care, access to local schooling, and basic life skills,” Lewis said. “Above all, the children were surrounded by love.”

The organization took a big step forward two years later, when Ruth Uribe, a passionate professional teacher who was born, raised, and educated in Cusco, joined the residential staff and became a leader.

Lewis soon realized that although the CW offered important emergency shelter for these neglected and abused children, it did not yet address the many reasons for their suffering. “Uneducated, unprepared, oppressed, and abused women cannot survive economically alone, nor can they provide for their children,” Lewis said. “They cannot begin the fight against abuse and violations to themselves or their children without proper tools or support. There are no government social services available to them. If unable to read, write or do basic math, their struggle for a quality life is severely limited.” 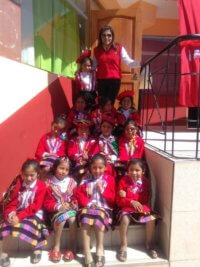 Lewis came to learn the underlying cause of child abandonment and poverty – Indigenous girls were not educated. “Young mothers unable to survive economically when abandoned by their male provider are the mothers most likely to abandon their children.”

Over time a gradual transition was taking place in the residential shelter, as the older children became independent and when CW ceased accepting new children. “Our core shelter kids had grown up in CW, were educated, and three were at the University. Free education for poor girls became our focus; together Ruth and I laid down the foundation for the new School for Girls.”

CW reorganized to prepare, educate, and empower poor girls to become future leaders for social change in Cusco and to end gender inequality, female abuse, and child abandonment. In 1997, the Chicuchas Wasi School for Girls opened.

Lewis said that it took great passion and effort to convince uneducated mothers that their daughters must be educated. “Ruth filled our first experimental classroom with 13 four-year-old girls, timid and shy with their eyes glued to the floor, unable to make eye contact. “But as a dedicated educator and creator of the comprehensive and forward-thinking new school, she trusted more girls would come and, slowly at first, they did and after a few years overwhelmed us.”

Slowly the mothers noticed a change in their daughters, told other mothers, and put more effort in having their girls show up daily and on time.

The regular academic curriculum is augmented with art and dance classes, a hot meal, dental care, and safe transportation to and from school. Uniforms, books ,and supplies are provided.

The results are gratifying. “Our first 10 CW girls to graduate from high school are staying in school; two girls scored high and attend the University; four girls are studying at the Vocational College; two girls are studying to retake the university exam,” Lewis recounted. “They are the first females in their families to be educated. This is the impact.” 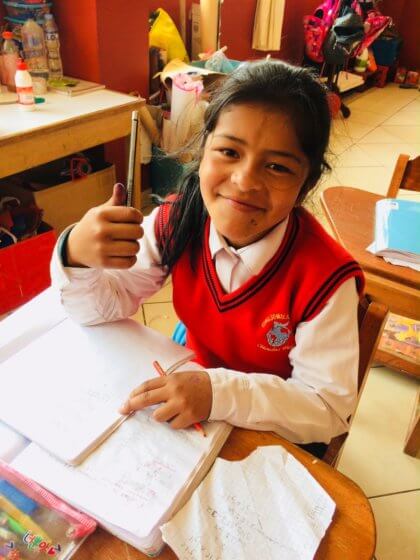 Lewis said graduates are staying involved and becoming role models for girls in their society. “We created the Alumnae Sisterhood to support and mentor our graduated girls who wish to remain in the loving arms of the CW school for support and guidance. They also help prepare the soon-to-graduate girls for the co-ed public high school.

The lessons of the school carry outside the classroom. CW maintains a big presence in the community with cultural celebrations, supporting social issues and marching in the streets on women’s issues to spread the message of the value and importance of education for girls.

There are no other free primary K-6 schools for rural indigenous Quechua-speaking girls like the CW School for Girls that also incorporates empowerment and leadership training. Lews said the budget of the school, now with 130 students, is $138,900, with 66 percent going to teacher salaries.

“We have continued for 32 years with support from kind people who believe girls’ education matters,” Lewis said. “We prepare our girls to rise above their circumstances for a quality life.”

Rae Lewis will read from Jump on the Love Train on Wednesday, August 7, 6:30 p.m., Reader’s Books Sonoma. For more information about the organization, contact Chicuchaswasi.org or 707.695.0504.