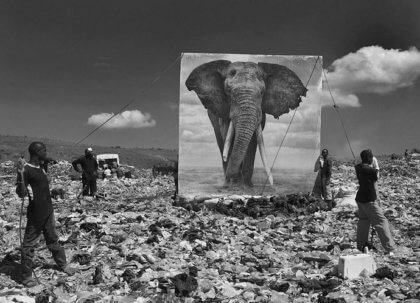 Nick Brandt seeks to change our perceptions, one photograph at a time. He wants us to “get it.” In the process, he does not give himself away; his real life is not on offer. His all-consuming passion concerns the massacre of the environment and animal species, and what to do about it.

Animal life in East Africa is in triage. 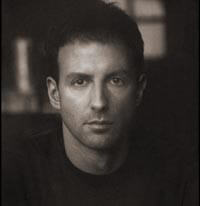 Through “Nick Brandt: Inherit the Dust,” his epic and disturbing panoramas shown at Sonoma Valley Museum of Art through September 8, he exposes inexorable degradation by opening the landscape to different interpretation, tackling the heartbreaking African animal diaspora as habitat is lost and humans take over. The photographs, he says, “actually cannot begin to capture the sheer scale of man’s astonishingly rapid and escalating expansion into, and destruction of, the natural world.”

But Brandt’s sympathies lie also with the same humans considered to be the aggressors (they’re not.) They too are inescapably under the duress of a burgeoning world, its greed and its corruption. “Environmental degradation hits the rural poor the most.”

The somber tone of the exhibition knocks the rust off normal perceptions. It’s not long on subtlety – it’s not meant to be. These are not pastoral scenes; the message is of overwhelming loss, and the uncomfortable friction between the natural world and the human world. The longer it’s observed, the darker the message becomes. The ugly truth is: when an elephant is killed, poachers and traders earn around $10,000, with none of it reaching the community.

Brandt’s unique process is complicated and time-consuming, involving set-ups separated by long periods of time. The giant panels are constructed of elaborate aluminum frames requiring up to 23 men at a time to carry 30-foot-long panels in 100+ degree heat, heave them up, strap them down, and level them carefully. As with all in the series, the life-size photos are glued to giant aluminum and plywood panels assembled on location. Sandbags raise the panels so the horizon lines match up. Shot on medium format black and white film, the final panoramic images are constructed of several negatives to capture the wide field of vision, then pieced together. 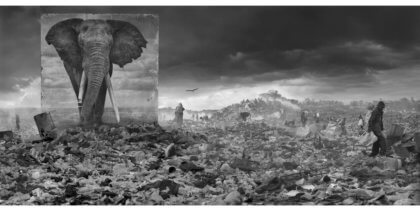 Shown above is “Wasteland with Elephant.” It depicts an elephant striding across the savannah in a sea of human garbage.

Waiting for the right stormy clouds and accompanying light, Brandt shot six photos over the course of one week. He was fond of this beautiful bull named Little Male, who was killed after he raided crops in the Amboseli ecosystem in southern Kenya. Every day, the people in the photo live on the edges of the dumpsite, searching through the garbage for anything they can use or sell. The local people became accustomed to the crew and just got on with their lives. Brandt wanted them to be oblivious to the presence of the panels and the animals featured in them, who are now no more than ghosts in the landscape.

Another poignant photo in the exhibition is “Alleyway with Chimpanzee.” It shows a sad chimpanzee with bowed head in an alleyway; it appears to be lamenting the loss of the world that it once knew, the impact on the land and animals from the sheer number of humans, and the denuded world that is now there in its place. The photo becomes much stronger due to the context in which it is now placed, next to a semi-stagnant stream of fetid sewage where perhaps a creek with clear forest water once ran.

But Brandt stresses, not all is doom and gloom. “Once upon a time, we in the West had these animals where we lived. We blew it, wiped them out, but we still have a chance to protect and preserve the places and those animals where they still live, and at the same time help to support local communities, through wide-scale employment in nature tourism and wildlife preservation.”

Brandt co-founded the non-profit Big Life Foundation in 2010 with Richard Bonham when they saw that something positive could be done. Big Life now protects 1.6 million acres with more than 200 rangers in 41 permanent and mobile outposts. With the aid of 15 patrol vehicles, three tracker dogs, night vision equipment, and two planes for aerial monitoring, this new level of coordinated protection for the ecosystem has brought about a dramatic reduction in poaching of all animals in the region, with numerous arrests of some of the worst, most prolific poachers. “So far, thanks to the generosity of donors worldwide, and the committed work of the teams in Kenya and Tanzania, Big Life has had great success helping to protect such an extraordinary and unique ecosystem.”

To quote a recent United Nations report, “The science on species diversity has been clear, and dire, for a long time. The scientific community generally has long been in agreement that the rapid rate of species loss means dramatic consequences for not only the health of the natural world, but also for humans as part of this planet.”

What can be done? Brandt has some thoughts: first and foremost, get the money out of politics. “It is at its most heinous in the U.S., with industrial lobbyists from Big Oil, etc., persuading (the mainly morally bankrupt Republican) politicians, who willfully disregard what is for the good of the environment, the animals, and therefore the future of life on this planet,” he says. “I believe ultimately they will go down in history as some of humanity’s worst villains for the sheer breathtaking amount of death and destruction wrought on the planet for the sake of short-term financial gain.

“While there is any kind of democracy still standing, we need to vote out those who favor oligarchic, autocratic rule. People power can also make a difference – it may be slow, too slow, but it can be done. If poor countries like Rwanda can institute plastic bag bans, and Kenya ban partial single-use plastic, so can we in the U.S. If Uruguay can switch to 95% renewable energy in the space of five years, then the U.S. can go a hell of a lot further than it has to date (although again this all comes back to the lobbyists.) And if a 15-year-old Swedish schoolgirl can energize millions of people across Europe to wake up and make changes, then so can anyone who has enough passion and fight in them.”

Brandt adds that if we are making an effort to do something, anything, to improve life on this planet – no matter how small – it is a valuable effort. Whether we no longer eat meat from factory farms, or collect used cans to take to the recycling center, we are to be thanked for doing something.

Each generation seeks to improve upon the standards set by predecessors. Fair warning to the current generation – Nick Brandt has laid down the gauntlet. Will we pick it up? The clock is ticking …

Jackie Lee is a writer and artist living in Sonoma. A supporter of the local visual arts scene in all its forms, her focus is on showcasing individual events and artists as well as those represented by established galleries.She may be reached at [email protected].