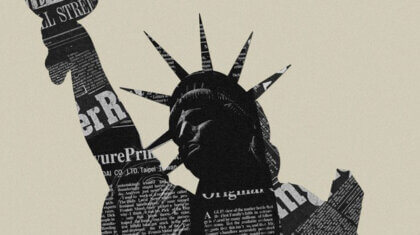 I grew up being told that democracy is messy; the events of this year certainly prove it. The freedom to vote is not – and has not been – a “human right;” rather it’s a privilege bestowed upon particular groups of people deemed eligible. As we know, America’s eligible voters were originally limited to white, male property owners and it took centuries for the right to vote to be extended to all others. Various reasons were offered for excluding groups of people, like women, minorities and felons: women were too uneducated, naive and emotional; minorities were too stupid and savage; felons deserved to be punished. The dominant caste in any society always has a long list of reasons why those in a subordinate caste deserve to be treated poorly.

Voting, of course, is simply one manifestation of freedom, but it’s emblematic of the notion of each person having a say in the construction of our political future. It’s a radical concept, in the sense of the root of the idea that each person is an autonomous individual, entitled to “life, liberty and pursuit of happiness,” as expressed in the Declaration of Independence. That idea, in turn, extends from British philosopher Thomas Hobbes, who earlier expressed that the natural state of man was autonomy.

Autonomy is a fiction, of course. Like all other animals on earth, human beings are dependent upon each other and the living systems into which we are born. Whatever degree of personal freedom and autonomy we might enjoy, it is constrained by our basic needs for food, water, air and shelter; beyond these are companionship, the power of collective labor and cooperating in common defense – the “it takes a village” thing. Accordingly, autonomous freedom occupies a space between selfishness and selflessness.

Selfish freedom, what we in America call “unfettered individualism” or “absolute liberty,” constantly pushes the envelope of social limitation and constraint, often to the point of tearing. For this reason, a body of laws and social conventions are used to place limitations on individual behavior deemed injurious to others or society at large. It is not coincidental that America, with its individualistic fetish, enjoys both the largest number of personal firearms and the largest prison population in the world. It’s not democracy that’s messy, it’s freedom.

This same messiness is visible in the “mask debate.” A simple and effective method of slowing the spread of a lethal virus has been elevated by selfish freedom to a symbol of tyranny. A common-sense measure to protect public health has run headlong into the disorder of American freedom and has cost the lives of perhaps hundreds of thousands of people.

Selfless freedom, on the other hand, is the voluntary acceptance of social responsibility, the willingness to set aside individual autonomy for the sake of the welfare of others. In other times, we called it “personal sacrifice,” and it was elevated to a moral calling. Such sacrifice cannot be demanded; unless offered willingly, it is an empty gesture. Willful sacrifice is one of the deepest expressions of freedom, which is why the voluntary sacrifice of one’s own life for the benefit of the lives of others – bravery – is honored.

Other modes of social and political organization are not focused on freedom, but order; the messiness of democracy is not tolerated but crushed. Selfish vs. selfless freedom; it’s up to each of us to choose.

One thought on “Freedom, selfish and otherwise”