Invasion of the hippocampus snatchers 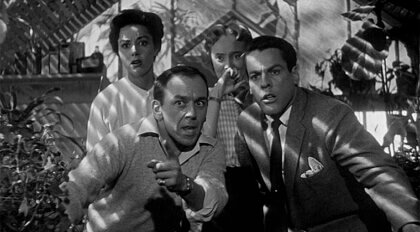 In the midst of America’s “red scare” of the 1950s, Hollywood responded with films like The Invasion of the Body Snatchers, the horror flick that generated the meme of “pod people.” In the film, a psychiatrist is visited by a growing number of people who claim their family members are not the same as they were; he dismisses their concerns, but ultimately discovers that the town’s population is being replaced with replicants grown from large “pods” placed near folks while they’re asleep. Over time, he remains one of the few not replaced and tries desperately to escape and seek the attention of government authorities. An unspoken theme is the stealthy invasion of communist thought, transforming individuals into a godless collective.

People are susceptible to all sorts of ideas and conspiracy theories when they are afraid, and target others as a justifiable reason for fear. Such behavior is a world-wide phenomenon by no means limited to America. The human penchant to believe in rumor, superstition, supernatural forces, evil spirits, demons and the like has repeatedly fueled fear-based episodes of murder, persecution, and genocide. Rebecca Nurse, my wife’s eighth great grandmother, was hanged as a witch in Salem, Massachusetts in 1692, for example.

Presently, America is beset by such an episode of mass hysteria. Psychologist Sue Grand, author of The Reproduction of Evil, calls this phenomenon “malignant dissociative contagion,” the uncontrolled spread of unhinged dangerous beliefs. False rumors, big lies, and scary conspiracy theories all fit the bill and affect brain function and structure: an invasion of the hippocampus snatchers, Q-people.

The hippocampus is a small region within the brain’s limbic system, sometimes referred to as the “brain within the brain.” It’s a deeply embedded, ancient structure intimately involved in both the formation of memories and the stimulation of emotional feelings. It sits in close proximity to the amygdala, the two nut-sized segments of the brain that mediate memory, regulate emotion, and the fight or flight reflex. When the hippocampus is damaged – and sustained high-levels of fear-based stress hormones like cortico-steroids strongly affect it – that leads to mental and emotional dysfunction. When severely impacted, dementia results.

It’s difficult for many of us to accept that wild ideas like “Jewish space lasers” are being used to start forest fires or pedophilic Democratic leaders drink the blood of children gain any traction at all, but such chaotic bits of disordered thought are not just the by-product of publicity seekers, they’re indications of possible stress-based brain dysfunction. Four years of trauma emanating from the White House plus a lethal pandemic that’s still raging out-of-control are major contributors to increased fear and anxiety. The sort of mass violence witnessed at the nation’s Capitol, its savage frenzy based on disinformation and fear of annihilation, is a clear indicator that we are in the middle of yet another dangerous cultural episode.

America rightfully cherishes its heritage of free speech but setting aside the First Amendment complications of social networking and sensationalist media, the damaging effects of fear mongering on the human brain cannot be dismissed. We are facing a cognitive/emotional crisis that risks tearing our nation apart. This is not simply a political matter, nor will it be solved by simply talking about unity; it’s a mental health problem. When malignant dissociative contagion is observed and folks we’ve known suddenly make no sense at all, it’s as serious as an infectious disease; it needs diagnosis and treatment or it will continue to spread.