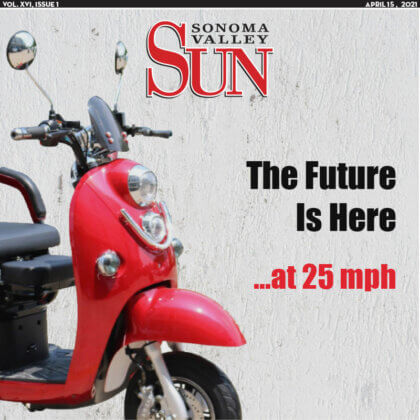 The future is coming up fast and, according to Howard Sapper, it’s driving an eTrike

A former marketing executive for film and music, a relentless promoter and fervent believer, Howard Sapper is in full entrepreneur mode as the CEO of a Sonoma-based micro mobility transportation company.

His cause is nothing short of mythical: to save the world, one electric vehicle at a time.

Apt for the quest, he named his company Pushpak Motors. According to Hindu mythology, Ram soars to the heavens in a chariot called Pushpak. Sapper’s updated vision has regular folks tooling to the grocery store. 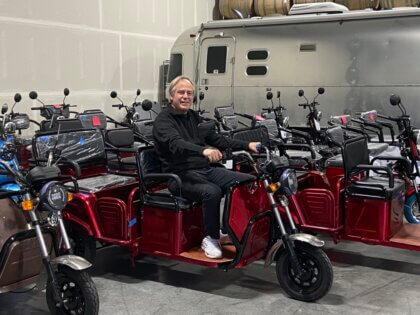 It’s not a bike, it’s not a golf cart. It’s not ‘old,’ it’s trendy. It’s got some style. “It doesn’t look like a mobility device,” Sapper says, “It’s a hip vehicle with multiple uses.”

It pushes 30 miles an hour, is road ready and you don’t need a license to drive it. It goes 50 miles on a charge. It’s ADA width and approved, so it can even pull into stores, cruise on bike paths. There’s storage space, a second seat. It’s “alternative low-speed electric transportation.”

Practical, yes. But Sapper — wired, passionate, a disruptor — sees a bigger picture. The Pushpak can be a vehicle for social and economic transformation.

There’s a shift going on, he says, pushed by the pandemic. Perceptions have changed. Why not a small, personal electric vehicle, as long as it looks cool?

There’s the environmental factor, of course, but also a community element. People don’t want to be encased in steel and glass. They want a magic carpet ride, to float through society. “It’s very social,” he says.

Pushpak builds out the vehicles in an Eighth Street East warehouse. Sapper’s showroom (just expanded) is in the El Paseo Courtyard at 414 First Street East. There are several models. The basic starts at about $3,100; the covered model, with its sleek curves, is about $5,300. The store also rents the rigs for a two-hour jaunt ($75) or a full eight-hour adventure ($125). Guided tours are also offered. 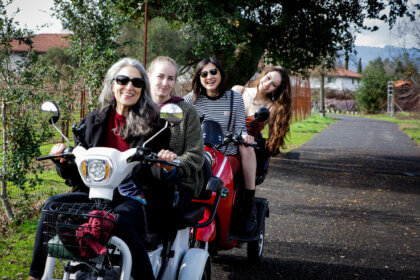 “I’m glad he has joined the growing list of small businesses that are using low-impact methods to see Sonoma,” says Tim Zahner, executive director of the Sonoma Valley Visitors Bureau. “Pushpak brings another great option for exploring Sonoma and the region with a unique way to get around. The electric scooters provide mobility to people who may not be able to walk as far for a walking tour or feel comfortable on a bicycle.”

Sapper will soon open a location on Ghirardelli Square in San Francisco. It’s a prototype. He foresees more locations, pop-up kiosks at tourist-heavy locations. Rentals are good business, but they also drive sales. He says that’s going well, too. As a national business, he’s getting orders from around the country. And interest in franchise arrangements, kind of like car dealerships.

He’ll tell you about the brakes, the flip-up seat, the shock absorbers. But, as those who want to save the world often do, he thinks beyond the small stuff. The movement is coming, Sapper says, and it’s good being on the leading edge.

Sapper, who’s lived in Sonoma for 35 years, knows a bit about a higher calling. He serves on the Sonoma County Commission on Human Rights. He’s the father of a daughter who suffered a stroke at birth and co-founded the local nonprofit Everybody Is A Star.

“The universe has this in store for us,” he says of the road he’s on. “It’s rewarding, it serves a need. It feels very good.”