This woman is not going to be good for you, he warned

Chapter 15: 1932 • Colusa, California ~ Comfortable around Mrs. Chatfield, Carl talked to her about the heat and the bugs, discussed the differences between hay and rice farming, and went on about Leghorns and Rhode Island Reds. They could talk about almost anything. It was Babe he was tongue-tied around. His sweaty palms wouldn’t come out of his pockets when she was near, his long legs stayed wrapped and glued to the swivel chair post, his large feet locking him on.

Lawrence thought Babe was spoiled, getting up late and being waited on hand and foot by her mother, but he was drawn to her. She was not like the Catholic girls back home, not like most girls he knew. She seemed older and bolder, quick and outspoken. But Lawrence didn’t interest Babe, Carl did — Carl, who didn’t say a word to her, who could hardly look her in the eye, who could only bow his head and lower his lashes and twiddle his thumbs. Babe wasn’t used to being ignored and perhaps didn’t understand that Carl was naïve and had never been with a woman. She set her sights on this tall good-looking, brawny Minnesota farmer, determined to have him. She went after Carl like he was a rodeo calf. Too shy to make a move on his own, he was roped and tied before he hit the ground. He never even felt the branding.

Lawrence, upset about their impending marriage, did everything he could to talk his brother out of it. “This woman is not going to be good for you,” he warned. “She’s not the kind of woman to marry. She’ll only cause you heartache and trouble.”

Carl turned a deaf ear. And so, within six months of meeting one another in the Golden Eagle Cafe, in an early morning Mass at Our Lady of Lourdes in Colusa, California, my father married my mother.

As it turned out, Lawrence wasn’t jealous. He was right. 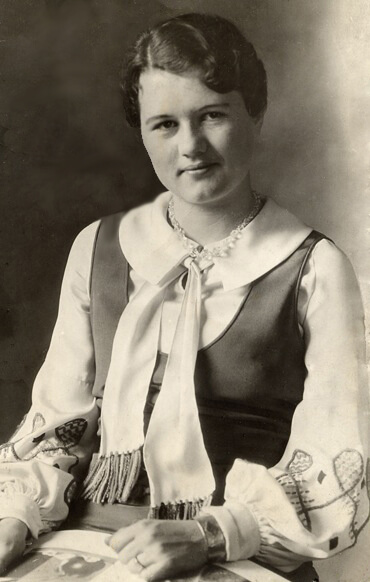 At an early hour this morning, Miss Noreen Chatfield became the bride of Carl Clemens of Rochester, Minn., at a ceremony performed in Our Lady of Lourdes Church immediately following 8 o’clock mass services. The members of the immediate families of the couple and close friends attended the ceremony. The groom is employed by the contracting firm that built the Colusa weir. His headquarters are in Stockton. At the close of the early morning service the bride and groom left for Stockton, where they will make their home. Their honeymoon has not been planned although they expect to visit the east sometime this summer. Clemens has many friends and relatives there.

Miss Chatfield is the daughter of Mrs. Nellie Chatfield of Colusa. They have resided here for the past year, coming from Chico. During that time two of Mrs. Chatfield’s daughters have become brides. Mrs. James Fouch, was also married here recently. At the impressive ceremony Margaret “Micki” Anderson of Chico, a close friend of the bride, was the bridesmaid. Lawrence Clemens of Stockton, brother of the groom, was the best man. The bride is a girl of many charms and has a large coterie of well-wishing friends.