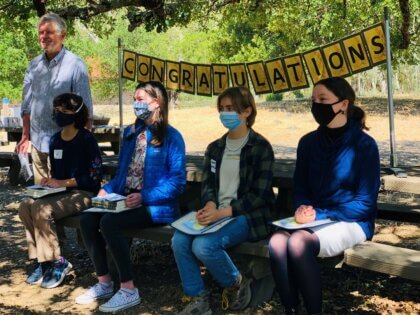 Winners of Jack London State Historic Park’s 2021 Young Writers Contest, gathering at the park for a celebration on Sunday, were greeted by author Bo Kearns. “It’s a pleasure to be among fellow writers,” he told them. “Jack London won his first contest at seventeen. You’re already ahead of him.”

The program, now in its sixth year, encourages middle school students (grades 6-8) to exercise their writing skills by creating an original 2,000-word story inspired by the works of Jack London.

A total of 47 entries were received, coming from as far away as Maine and New Jersey.   All students who entered the contest received a free pass for admission to the park, which includes one carload of guests.

This year’s theme was “Coping with Isolation,” an apt topic for kids navigating through the rigors of the pandemic. Students entering the contest were instructed to create a fictional story in which their character takes a journey through an unknown land, alone.

The entries were judged blindly by a panel of volunteer judges (not park staff) who were not given the names or locations of the authors. In Jack London’s famous short story, “To Build a Fire,” the protagonist battles the fierce winter landscapes of the Yukon with only a few supplies and his wit and will to guide him.

“The entries show how nature can inspire creativity, just as Jack London found in his many stories and in his life on the flanks of Sonoma Mountain, where everyone can find inspiration today,” said Matt Leffert, executive director of the park.