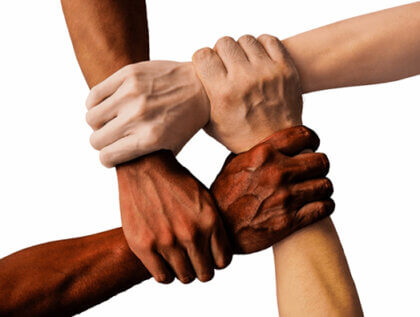 When human beings lived tribal lives in relative isolation from one another, before the technology of the wheel and all that followed, tribal culture provided a coherent framework within which each individual had a place and role; individual differences were less significant than cultural similarities unifying tribal experience: dress, appearance, ritual and language. Over hundreds of thousands of years, thousands of different human cultures and languages emerged.

With the arrival of technological mobility – wheeled vehicles, sturdy ships, and the domestication of horses – cultures that had been isolated from each other began to have contact, and their differences generated conflict. The historical record of the past 10,000 years provides ample evidence of conflict between cultures.

Today’s world of global mass transportation, communication, and economic interdependence has brought cultural difference to our doorsteps. The notion of imposing cultural norms – the rules, conventions, manners, and decorum particular to each culture – has run headlong into the reality of difference and issues of cultural dominance and submission. When are the rules of dress, speech, and decorum simply levers of authority, control, or racial supremacy?

The corporate world has long enjoyed exercising its authority over employees – imposing dress codes, ways of speaking, and behavior that erases difference; but even that model of regimentation is undergoing pressure to change. In the age of Covid and Zoom, the notion of “business attire” yields to the comfortably casual. Communist China, which during its cultural revolution imposed uniforms on its citizens, currently sports a generation of western-style fashionistas dressed like kids in Cincinnati.

The social movements of the present are ironically being described as tribal or nativist. These labels harken back to an age when the imposition of cultural norms was absolute and difference not tolerated. Politician Patrick Buchanan, a speech writer for Richard Nixon, telegraphed our current dilemma when he characterized America’s “culture war.” His view, now shared by the likes of Steve Brannon and hordes of Trump supporters, displays an intolerance of difference: nostalgia for an imagined past of homogeneity. In reality, that past simply buried difference – sexual, racial and economic – beneath a facade of conformity.

One might argue that all cultural difference is valid and acceptable, that the imposition of any cultural norms is improper suppression; the logical extension of that line of thought is chaos. Without common frames of reference the day-to-day transactions of daily life are impossible. Nonetheless, we are faced – individually and collectively – with evaluating when and if difference is of consequence or not, and under what conditions. This requires an examination of our individual and collective beliefs and behaviors.

Recognizing difference is purely human, but how we respond to it is a matter of choice influenced by social habits, peer pressure, and personal preference. Attempts to legislate the impacts of difference through law or the courts is variably successful, but cannot dictate human feelings, only public policy. On an individual basis, each of us must confront our own reactions to difference, and judge which of those are in support of racial or ethnic bias and which are not. The same is true of public policy. Habits are notoriously difficult to break, even poor habits with little to no practical basis, but in accepting difference, break them we must. The world depends upon it.