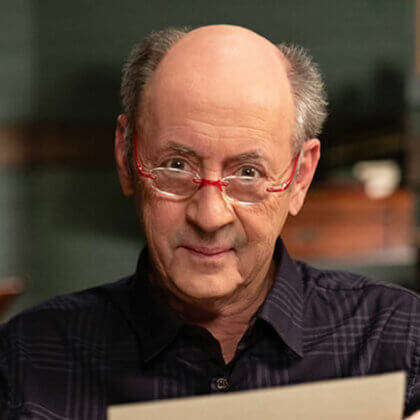 Billy Collins was named “the most popular poet in America” by Bruce Weber in The New York Times. He’s also one of the best loved poets the United States has produced. And he’ll be reading and talking at this year’s Sonoma Valley Authors Festival this year August 27—29 at the Sonoma Mission Inn.

Collins is like your father’s uncle everyone talks about. Nobody’s seen him in a while. He’s always traveling. You’re not sure you care even though he’s a writer. He doesn’t write dystopian science fiction or about the rise of feminism. Or how super mutations will save us.

Then he shows up at Christmas. He reads a poem about a dog who truly hates his owner and his toys and the noise of his tags. He’d like to bite off a piece of dad. You look around the room as your jaw drops.

It’s really a very funny but horribly sad piece. You can’t wait to read more from this guy so you go to Readers’ Books the next day for some  Collins. You don’t even like poetry. Except this poetry, like a zillion other readers.

When Collins is in the audience and not reading his work he’s always taking notes. “I was an only child with a great home life and I had years of Catholic school. I was trained by nuns to take notes, so I’m always taking notes.” He pointed out to me that the combination of speakers’ varied specialties at this year’s Sonoma conference offers a solid note-taking opportunity.

“You have Walter Isaacson, an accomplished author, journalist, and business leader, and Doris Goodwin, with her expert understanding of both sports and history. And others.” Isaacson’s book The Code Breaker: Jennifer Doudna, Gene Editing, and the Future of the Human Race opened last month on The New York Times bestseller list at number one. 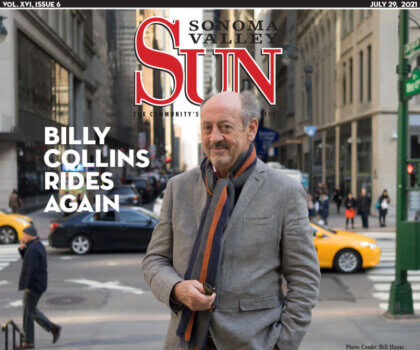 Past Sonoma conferences also offered wide-ranging specialists. The festival is an opportunity to hear some of today’s best and most informed writers face-to-face in a smaller venue.

“I don’t get outside the tent [the venue] at these gatherings. I don’t do well with a glass of wine chatting. I’m inside, taking notes,” Collins said. “I’m just not good at small talk… but the Sonoma conference doesn’t have any small talk.” He goes on to say there’s non-stop talk, but about the ideas spurred by the topics, or polite differences of opinion. Collins thinks the festival brings together “a public display of intelligence. It’s a phenomenon in this country to gather scientists, sports experts, and leading thinkers who write and speak.” He likes the variety and attended in 2018 and 2019.

Collins says that Sonoma is “like the Sun Valley [Writers] conference without the ice rink. That’s fine because there aren’t a lot of these experts who need an ice rink.”

I wanted to talk about the use of humor in his work. He’s said previously that “humor is a door into the serious.” Was using humor part of his career plan? Did he know how he’d work it into his writing? Did he know he’d bring poetry to the masses? Was fame something he was after?

NO to all of the above. “I never angled for anything. I started to write poetry knowing poets were supposed to be miserable so I wrote unhappy, miserable poems early on. It took me decades to be straightforward, to learn not to suppress my natural reactions, feelings.”

We talked about the difference between writing poetry and prose fiction. He believes script and novel writers are people observers and their focus is “outside the house.” They widely observe situations and individuals. Poets are the opposite. “I keep my head down. I’m at the insect level of the language. The interest is in myself. Prose writers are outside the window; I’m inside.” He notes that poets have an extreme focus on themselves. Observation of people on the outside? Unnecessary.

“I never set out to be any of those things you hear about me. There was no plan. I often say ‘I keep my eye OFF the prize.’ ” He never thought about best-sellers or big audiences of readers. He sat down and concentrated on one poem at a time. “It takes about two years to accumulate enough for a book,” he said.

Collins talks about the Sonoma conference and his writing in exactly the way his readers would expect: he’s focused, friendly, and relaxed. And funny. He mentioned years ago that he’d really enjoy having a coffee-colored Aston Martin DB4 with cracked green leather seats. I’m pretty sure he doesn’t have it yet. Maybe at the Festival.