Twists and turns on ‘Sunset Boulevard’ 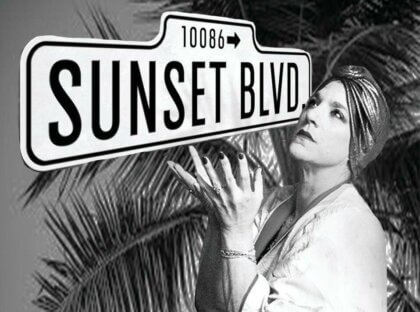 Norma Desmond is back, and she’s ready for her close-up.

The faded diva from the classic film noir Sunset Boulevard, resurrected years later in the Andrew Lloyd Webber musical of the same name, is back. Sonoma Arts Live’s production of the Broadway smash runs through October 10. 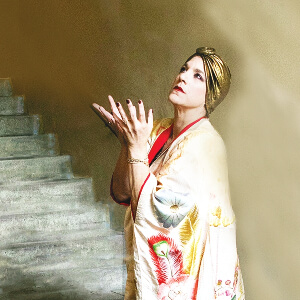 Dani Innocenti Beem stars as the reclusive, deluded Desmond — once a huge star of old Hollywood, now aged and forgotten in a crumbling mansion on a certain Los Angeles street. Along comes a cynical screenwriter (played by Michael Scott Wells). He’s flat broke, and she offers him a writing job… among other things.

Beem is well known to local audiences for her leading roles in Merman’s Apprentice, Gypsy, and Hello Dolly, parts she says “have been funny, larger than life, ballsy, strong, fierce, independent women with big voices. Norma is a nice change. She is of course still your larger-than-life character, but more delicate and fragile in her grandeur.” 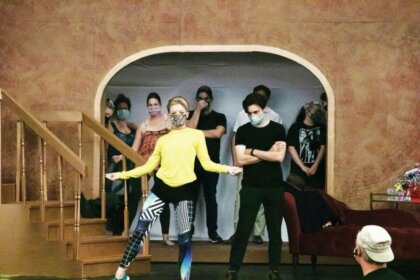 The show at Andrews Hall is directed by Carl Jordan (above, during rehearsals). It’s the first live SAL production since the Covid lockdowns. The entire crew is thrilled to be back.

“That first time back in the room, I’m not going to lie, there were tears, hugs and then more hugs,” Beem says. “ I was home again. There is something so comforting walking in and seeing that beautiful proscenium arch.”

It was a little scary, too, after such a long layoff. “But you fall right back into it. The same patterns. The same greetings to the fellow cast members. The same warmups. It’s business as usual,” she says, “but with masks, temperature-taking and hand sanitizing.”

Another tell-tale sign of life in the theater: “Your car starts accumulating the rehearsal debris.”