Halloween and the Rite of Reversal 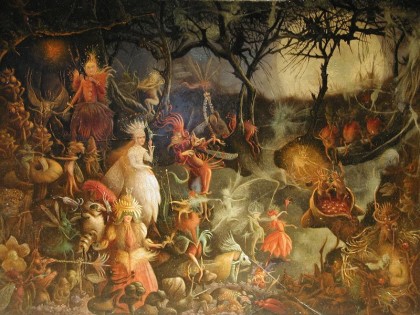 By George McKale | From The Sun archives

As many residents of Sonoma can attest, hauntings are not limited to Halloween. In this town, the dead can be heard scratching at the walls, howling at the moon, appearing on the darkest of nights as shimmering shades of light. These apparitions have been known to tap the unsuspecting on the shoulder, seemingly safe at home, while resting in that state somewhere between consciousness and sleep.

Hauntings, of course, will be particularly active in just a few short days.

Once again, it’s that time of year when young children dress to scare while roaming the streets of our old pueblo.  In search of something far more precious than gold, it is candy they seek, with the threat of a sinister deed acted upon those who do not relinquish the morsels of sugar coated, cavity-causing delights.

As with all rituals, Halloween has a deeply rooted, rather ancient history.

Halloween’s origins began over 2,000 years ago with the Celts, who held a “summer’s end” festival known as Samhain on November 1. On this day they believed that the border between this world and the “other” became transparent, and spirits, both good and evil, could pass through with ease.  To ward off evil spirits and avoid ghostly hauntings, costumes and masks were worn as a disguise to elude evil intentions.  Today, All Hallos’ Even, is known as the “eve” of All Saints’ Day.

Anthropologically speaking, Halloween, and the antics that go along with it, play an important role in our society.  Without out it, our society may be doomed to an existence of internal anxiety. Halloween is known to anthropologists as a rite of reversal. It allows men to dress as women and women as men, children to come to terms with death by portraying it, and little ballerinas to don broom sticks with dyed black spiky hair.

Van Gennep, a French ethnographer and folklorist, identified three kinds of rites of passage: separation, transition and incorporation.  Rites of separation take place at funerals, rites of transition in ceremonies involving pregnancy and rites of incorporation for marriage ceremonies.  In essence, rites of passage mark the evolution from one stage of life to another.  They have also been termed ‘life-crisis rituals’. The only rite missing from the trilogy is the rite of reversal.

Every society is bound to a set of homemade rules and regulations designed to maintain order.  In turn, all cultures seem to have a ritual that encourages a day of potential chaos. Rituals such as Halloween are designed to release pent up energy associated with the day-to-day rigors of maintaining order. It’s simply a way to let off some steam.

When my kids were younger, they dressed up like a historian. Talk about scary! This October 31, go out and get a little crazy, have a happy and haunted Halloween and watch out for the little ones.

— from the dark, dusty Sun archives