Le cirque is coming to town

Ringmaster Michel Michelis’ troupe is back in the spotlight

Michel Michelis is living the dream right here in Sonoma, and, thanks in large part to Pixar’s John Lassiter and Brad Lewis—who recruited him for the Cars 2 feature length cartoon—he might soon be world famous. “They wanted someone who spoke English with a big, rough French accent,” Michelis tells me. “So I’m the voice for a French car named Tomber that operates on the black market.” He adds, “They recorded me on the Pixar campus in Oakland. It was super cool.”

What’s also super cool is that after a two-year absence, Michelis’ very own creation, Cirque de Boheme, returns to Sonoma, perhaps bigger and better than ever before. His last circus show took place in December 2019, before the pandemic hit hard and crowds were deemed taboo and verboten — interdit, as the French say. 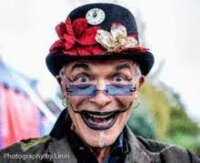 This year, Michelis has recruited talent from around the world: Yuko Haka from Japan; Beth Clark who trained with the National Circus School in Montreal and worked with Cirque Eloize and the Pickle Family Circus; Ken Garr, a magician who has performed with Lacey J. Dalton and jazz great Jean Luc Ponty; and juggler Dan Holzman, a veteran of late night TV.

This year for the first time, another headliner is Michelle Musser, a mime and a clown who has toured with the Ringling Brothers and for the past three years has been part of the Sirkus Finlandia troupe, which is based in Finland.

Let’s not forget Michelis himself, the ringmaster, who tells me, “Sonoma has always been receptive to French culture. I love to share it and to show that there’s more to France than wine and food.” This year’s show is called “Behind the Mirror.” As always, there’s music, magic and mystery and a secret that’s revealed at the end. About Michelis’ life there are no big secrets, at least none that I know of. Born in 1960, in Montpellier, in the South of France, he went to the circus for the first time at the age of six and told his father, in French of course, “One day, I’ll be on the circus stage.”

At 16 he moved to Paris, had a radio show called “Champagne,” handed out business cards that read “Michel Michelis, Bohemian,” played a barrel organ and sang his theme song, “Je ne regret rien” (“I regret nothing”), at flea markets and on street corners. In both France and the U.S. he worked with Cirque du Soleil, which was founded in 1984. Ever since then he has not looked back and wanted to erase the past, especially since he settled in Sonoma and created Cirque de Boheme.

This holiday season longtime fans and fellow Sonomans can hear Michelis speak his raspy tough-guy English with a French accent. At the end of the day, it’s all good. I have no regrets.”