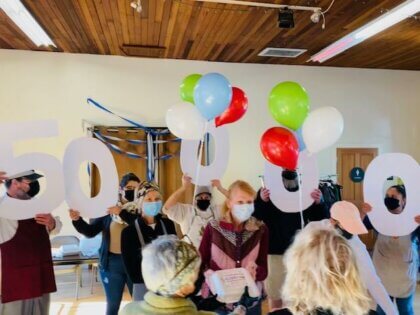 Sonoma Overnight Support served its 50,000th meal of 2021 in early December – nearly three times the annual number only three years ago. The increase speaks to the growing number of homeless and food insecure in Sonoma Valley, and is a testament to the hard-working staff and volunteers that prepare and serve the weekday meals at Springs Community Hall.

“It was fitting that we reached this momentous milestone on the fifth anniversary of the death of our extraordinary founder, Elizabeth Kemp,” noted Kathy King,  the nonprofit’s executive director. “Elizabeth’s vision was to feed the hungry and shelter the homeless of Sonoma Valley, and though it is unfortunate that there is such a need here, we are proud to be able to meet it.”

King thanked the “unbelievable kitchen staff: Daniel Kahn, Dawn McIntosh, Pat Collins, and Laura Ramirez, along with our many six-star volunteers who work in the kitchen every day to serve those in need.”