A Day in The Sun, on an e-trike

You may have seen a small entourage of smiling tourists cruising the streets of Sonoma on two-person electric trikes known as “Pushpaks.” I’ve noticed them a few times, and since I’m always looking for ways to avoid burning expensive gas while sitting in long lines of traffic, I decided to stop by the Pushpak store on the Sonoma Plaza to get some information. 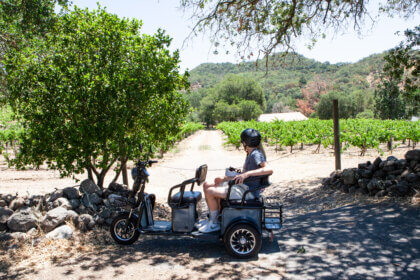 I was greeted by a friendly manager while a small group of eight people tried on helmets and scanned QR codes. They asked if I’d like to join their three-hour historic wine country tour, and before I knew it, I was atop my own Pushpak listening to safety and operation instructions.

The two women on the Pushpak next to mine looked to be around 30 or 35 and were visiting from Miami. They kept giving each other looks and laughing every ten or fifteen seconds and I was starting to worry it was because, due to the impromptu nature of my outing, I had left the house wearing white tube socks with black leather shoes.

Anyway, Rachel and Gretchen turned out to be incredibly friendly. During the tour, I got to know them, as well as Tara and Robert from Chicago, and two other couples who were up for the day from Silicon Valley. It was a diverse group of fun and interesting people and by the end of the tour, they all felt like friends.

Our tour guide, Howard Sapper, also the owner of the business, safely led us through the streets of Sonoma to various stops around town, regaling us with historical information about Sonoma interspersed with a mélange of witticisms, dad jokes, and clever anecdotes.

On the first part of the tour, we learned about the 12,000-year Native American history in Sonoma Valley, the Sonoma Mission, Catholic Church, as well as the history of several of the wineries and families associated with them. We also learned about how Sonoma used to be a place with diverse crops and livestock until people realized what a great place it was to grow grapes for wine.

It was time to head out. Operating the Pushpak was easy and fun. They don’t go over 18 mph so I felt very safe, and since they are open-air, I felt connected to the breathtaking views. Surrounded by the faint sound of chirping birds and bathed in the golden sunlight of a warm spring day, I was seeing Sonoma in a new way and realized that it is no less beautiful than the regions I toured a few years back in Alsace, Bordeaux, and Provence. 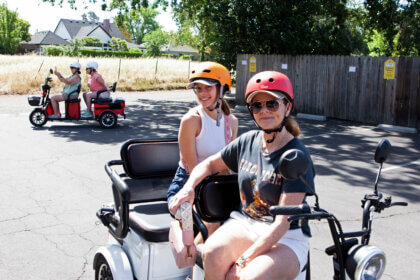 We stopped under the shade of a large tree and looked out over panoramic views of vineyards while we enjoyed a light midday repast. Robert shared a beautiful story about how he had brought his wife to a nearby wine region 20 years earlier intending to propose but through a series of mishaps, decided to wait until they got home. He then mused that he should have brought her to the very spot we were at that moment to propose and we all agreed.

There was suddenly an air of romance and bonhomie, and as a light breeze began to blow across the vineyard, Gretchen asked if I knew of any good restaurants, to which I replied that there were many. Rachel replied that they would love it if I wanted to join them, and with that, we all set off on our Pushpak and headed toward a local winery where we enjoyed some of Sonoma’s excellent wines that tasted even better thanks to a lovely day and new friends.

Several people in the group mentioned that they now felt a real connection with Sonoma and that they planned to come back for an extended stay on their next trip. Howard playfully quipped, “just don’t fall in love, because the real estate market is crazy right now.” Gretchen glanced over and I smiled in her direction. Probably getting ahead of myself, I decided I would propose to her someday under the tree where Robert shared his story with all of us.