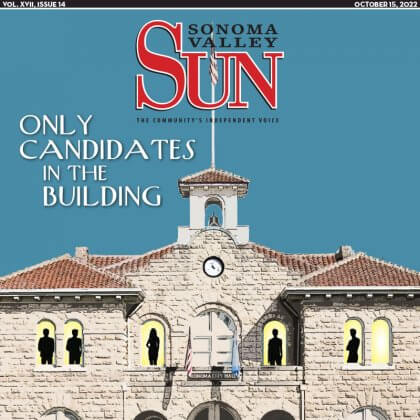 The City of Sonoma is lucky to have three exceptional candidates for City Council this election: Patricia Farrar Rivas, John Gurney, and Ron Wellander. All three know this town well, and have lived or worked here for many years.

John Gurney, past police chief, recent Director at the Community Center, and long-involved volunteer with nonprofits in the community, is a thoughtful leader who appreciates public participation and respects the role and limitations of government. He also holds considerable institutional memory about this community and understands the ideas and decisions that have brought us to this point in time.

Long-time resident Ron Wellander, the current Chair of Sonoma’s Planning Commission, has spent the past decade serving on various public bodies dedicating his time to caring for the community. He too shows respect for the public, welcomes a diversity of opinions, and is open to ideas. His leadership on the Planning Commission has been steady and serious; he does his homework and pays attention.

Patricia Farrar Rivas, the only woman in the race, spent over a decade in Sonoma during the 1980s. She then moved to San Francisco to found and operate Veris, an investment advisory firm with a focus on ecologically sustainable and socially responsible investing. While Patricia served as CEO, Veris managed a fund of $2 billion. She knows how the real world works, understands finance, and is prepared to work with Sonoma’s 21st Century challenges. Now retired, Patricia returned to living in Sonoma five years ago.

These three exceptional people, with current council member Sandra Lowe and Mayor Jack Ding, would give Sonoma one of its best City Councils in many years. Reflecting a variety of views and outlooks – and the ability to articulate them well to each other – the panel would engage in vigorous discussion and informed debate, a key process in producing good outcomes. We don’t need ideologues or single-issue council members; rather, we benefit from having intelligent, hard-working, experienced leadership prepared to hammer out solid policy solutions that meet current needs and future prospects.

Still reeling from multiple, unexpected council member resignations and appointments, Sonoma needs steady leadership. The job of the new council will likely include hiring a new City Manager, new Planning Director, new Building Department head, and other key personnel. Having mature, experienced leaders at the helm is exactly what’s needed as we recover from the social and economic impacts of the pandemic, adapt to new housing laws, cope with a changing climate, accommodate an aging population, and deal with soaring home prices and the pressure of increased land speculation.

We need serious people for a serious job: the responsible, caring leadership of the community. Patricia Farrar Rivas, John Gurney, and Ron Wellander fit the bill. They have our endorsement.