From Guadalcanal to Sonoma, a life well lived 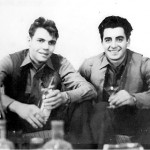 (Jackson Love | Sonoma Sun Intern) This story ran in The Sun shortly before Socrates Nicholson passed away on Saturday, Feb. 16. He’s shown, at right, with his best friend Joe Roberts serving in the Marine Corps circa 1943.

Every Sonoma local is familiar with Steiner’s Bar on the Plaza, but not all know that in a back corner of Steiner’s dwelled a group called “The Geezers.” This is what a group of Marine Vets of WW II called themselves. They shared stories and made each other laugh and met every day, for a while. Sadly, only one remains, Socrates Nicholson.

In 1943 Socrates was 17 and very much wanted to be a Marine. But his father suggested strongly he go to college on the V12 Program, which recruited kids out of high school and sent them to college. Upon graduating, they became Officers in the Marines. Socrates father wanted to keep him out of the war as long as possible.

Socrates was put into the college program in Flagstaff, Arizona. He was not happy about this at all. He wanted to be in the war. Immediately. So he hatched what he thought was a clever plan, “I’ll flunk out of school and go straight to the Marines.” And he did all right, getting shipped off to boot camp as a PFC instead of the Officer he father had planned on.

After boot camp he boarded The Polk, heading to the South Pacific. Socrates recalls the following: “There I was in line during chow time with all the rest of us privates, looking into the windows of the officers dining area, seeing their fancy uniforms and their food. I could of had white coat waiters if I’d stuck with the officers program. I was beginning to see my dad’s point!”

At the end of Boot Camp, when they were yelling out assignments, they asked if anyone was a barber. His friend Joe yelled “Socrates is.” His dad was a barber, he wasn’t, but he had spent time cutting his friend’s hair. He was smart enough to know this would be a good position to have, so he didn’t object.

He was sent to Guadalcanal, his camp serving as the Corps headquarters. “This was 1943” says Socrates, “and our camp was the battalion which replaced the deceased and filled in their jobs.” Socrates notes how lucky he was that he didn’t get sent to Guam then, where over 3,000 Marines perished.

The only child of Greek immigrants, Socrates was anxious to go to war, but of course missed his family. His mother thought she was being sweet by sending a care package with Spam. “I guess she didn’t know that was a war staple,” laughs Socrates.

While he didn’t make a lot of friends, there was one who became one for life — Joe Roberts. “I was best man at his wedding and he did the same for me. And he is still my best friend.”

Socrates recalls a funny story about the beginning of their friendship. “Joe and I had become pals in boot camp but then Joe got the measles and had to be sent home to recover before being reassigned. I lost track of where he was stationed when he came back. I sent a letter to his family, and they forwarded it overseas to Joe. So Joe went from camp to camp looking for me and it turned out we were stationed across the street from each other!

“So one day I’m sitting on a bucket watching a movie, and who should walk up but Joe saying ‘Hey thanks for the letter!’ That letter went 14,000 miles to go two blocks.” Joe ended up fixing it so they could be in the same company. “We worked hard but had a lot of fun together, saving up our beer rations to have parties.”

Socrates remembers well the moment he heard the war was ending. “I was cutting a General’s hair on Okinawa outside his tent. General Gager was his name, and this Marine just walks up and says ‘Good morning, do you men know the war is over?’ Well, the General said he’d have to go read the newspapers about that, but the man said ‘What, you don’t believe you don’t believe me? The war is over!’ I never found out who that soldier was”

Socrates married and settled in Sonoma in the late 1960’s purchasing the land that is now home to the Nicholson Ranch Winery. His health is frail, but once in a while he still makes it in to Steiner’s with the help of his daughter, Ramona, to remember his pals, The Geezers.