What’s the worst that can happen? – Our writer goes all out for the story – and gets the part 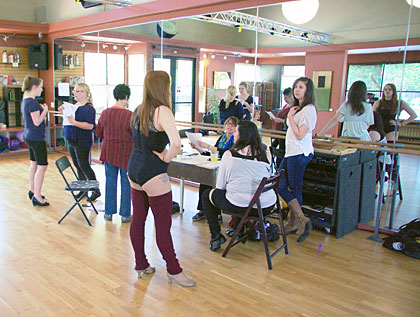 (by Kira Catanzaro) I grew up performing in community theatre and school plays, aspiring to a career on Broadway. Not pursuing that dream is a regret that creeps up occasionally, so when I moved to Sonoma last summer, I was thrilled to find a thriving theatre community with a dedicated theatre space.

Sonoma Theatre Alliance (STA) acts as administrator and fundraiser for several individual theatre companies including Silver Moon Theatre, Narrow Way Stage Company, Experiential Theater Company and Sonoma Stage Works. All of these have recently held auditions for their 2013 Sonoma Festival of Theatre shows. The season begins with Silver Moon’s “Let’s Misbehave,” on May 16, in the newly remodeled Andrew’s Hall, on the Rotary Stage.

STA productions are created with a pool of local resources and talent, from first timers to professionals. “First time audtioners should definitely come,” said STA Executive Director, Jaime Love. “What’s the worst that can happen?

Silver Moon’s Artistic Director, Nellie Cravens, will teach a class on auditioning at the community center in the fall. She encourages everyone to audition for everything they can. “It’s important to practice auditioning and you never know who will see you.” A director remembered an audition Cravens had done for one show, and cast her for another, years later, based on that audition.

Cravens gave me some tips, and I went to the Experiential Theatre Company’s audition for its summer musical, “Cabaret.” I prepared a 90-second monologue, got a new headshot and worked on 16 bars of an up-tempo song that showed my vocal range. I bought a new pair of character shoes to dance in, and said a fervent prayer before I went in to try out for the community theatre production. I was prepared.

I was not prepared.

While I filled out an audition sheet, I saw my competition: twenty-somethings doing variations of the splits, and wearing sparkling leggings and other eye-catching theatre garb. I was the only, dare I say it, middle-aged, person in attendance. A few gathered in excited chatter around the director, Cat Austin, choreographer Staci Arriaga and music director Rachel Robinson. Austin welcomed the auditioners, emphasizing her desire to see what was going on below the surface of the script, the song and dance. She wanted depth. “I want to cast an actor who is able to show me some strong choices they are making in their portrayal,” said Austin. “Yes, even in an audition.”

The audition began with dance. After two minutes, I wanted cry. I wanted to leave. I wanted to turn invisible, wend my way through the limber legs and tiny butts, pick up my bag, walk out the door and never think about “Cabaret” again. Instead, I tried to bend my body into a pretzel, plié to the floor, do fan kicks, step onto the right foot while my left hip was pulsing forward, all the while wearing a smile with a deeper story behind it on my sweating face. (This is investigative journalism at its best.)

I wasn’t a consideration for the ingénue Sally Bowles. (Direct hit to the middle-aged ego.) Instead, Austin asked me to do cold-readings from the script for the part of a prostitute and then the part of boarding house owner. I dug up my best rendition of a German accent and threw myself into those roles. She looked at me, head askew, trying to imagine me without makeup and, “olded up,” she said.

While waiting my turn to sing, I talked with some of the others auditioning. One woman, CC Sheldon, is in “Hedwig and the Angry Itch,” a show musical running indefinitely in San Francisco. Kevin Gruwell, a psychology student, only performs in musicals. His last was “Legally Blonde” with the Missouri Street Theatre in Fairfield. Nora Summers, from Santa Rosa, said she prepares for her auditions by stretching and doing vocal warm-ups. Being confident helps a lot. When she goes in she tells herself, “I got this. The other people don’t matter.”

When it was my turn I gave my song my all, followed some direction and sang it again.

Audition complete, I went home and sobbed over what I felt was a failed audition. I called a friend and told her how I regretted having given up the theatre when I was young. That’s it. I was done. My dreams of a musical theatre comeback were gone.

But then, Craven’s advise, “Go to every audition you can,” shook me from my defeatist position.

I had another audition scheduled in the next half-hour for Sonoma Stage Works’ Playfest staged readings. It was straight acting. No kick line! I wiped the mascara off my cheeks, pulled my proverbial act together and went to audition. The dramatic monologue I’d prepared didn’t go to waste after all, and I got to do a comedic piece from the acting class I’d taken with Cravens. I left that audition happy and confident.

I didn’t get called back for either “Cabaret” or “Playfest,” so I looked for my next audition and began preparing for it.

Then, the unexpected happened. At the eleventh hour, I was called back for three different roles in “Cabaret,” including a dancing part. After three days of callbacks, I was invited to join the cast in one of the title roles, Fraulein Schneider, the boarding house owner.

“As a director I like to zig when the audience thinks we are going to zag – create something very different and fresh even with a tried and true script and music,” said Austin. “Be prepared to be very surprised by our version of this classic piece of musical theatre.”

Whether you do it to resurrect a dream, to try something new or as a magical way to get involved with community, come and audition for your theatre.

“If they are too shy to audition, start out by volunteering to work backstage. Makeup, costumes; there are a million things backstage just as exciting as being on the stage. You’re still a part of the show. And you get to see how a show really works,” said Love.