By Stacey Tuel
In Sonoma, we’re lucky to have a new generation of farmers taking to the frontlines.  A dedicated group of young valley farmers are doing more than feeding us delicious produce; they are also stewards of our land and soil. Recently, I spent the day with three of them. 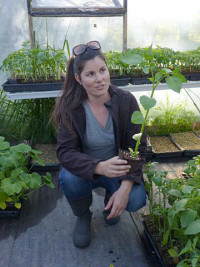 Andrea, 32, wears many hats – she’s also a farm and garden consultant, as well as an active farmer advocate.  She’s just returned from a trip to Washington D.C where she represented the California Certified Organic Farmers Board of Directors. But like many young farmers, she also works a part-time, off-farm job.

Her vision is long-term access to good farmland – not just for herself, but other small farmers as well.  To her, it’s simple; any community that wants to sustain itself should invest in its farmers.  As customers stop in to her stand and ask advice about planting their home gardens, they see what a valuable asset she is to our community.

But offering sage advice is just another of her many skills as a renaissance farmwoman.  After market, she packs up her truck and heads to the local radio station where she hosts her own show on sustainable growing and doles out more of her valuable knowledge. 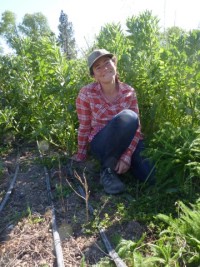 Leaving Friday’s market, I head down West Spain Street and stop in at Sweetwater Spectrum, where behind the big cedar fence is a small, flourishing farm.  Sweetwater, a residential community for adults with autism, hired Rachel in 2011 to design and establish a small working farm and resident garden.

Using a mixture of permaculture principles and standard organic farming techniques, she turned the small space into a productive, thriving, and educational farm.   Her fields are a mix of annual crops, sprinkled with perennial herbs, fruit trees, flowers, and even chickens. It’s not just a productive farm; it’s also a peaceful and beautiful place for the residents at Sweetwater.

Like both David and Andrea, Rachel is not a Sonoma native. She’s an East Coast transplant, and since arriving in 2006, she’s been putting down roots, her own, as well those she’s grown in farms and gardens all over this Valley. She began with Lunita Farm, a small farm and CSA program, and has since expanded to home garden and small farm consultation.  Her latest project is a partnership with Gundlach Bundschu, where she’s putting in vegetables gardens for the winery.  Rachel, 31, first fell in love with farming when she attended farm camp at age 11.  Now she studies permaculture design and ecological landscaping.  Her vision is integrating productivity and sustainability of the land she works on – wherever that might be. 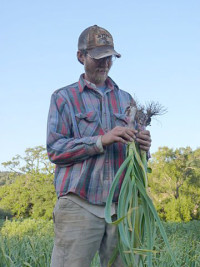 Up before the sun, David is out moving pipes, checking on crops, and bagging glistening carrots for farmers’ market. David, age 37, has farmed at Oak Hill since 2007.  Before farming, he worked as an environmental policy consultant, and laughs as he admits that he traded a “9 to 5” job for his new “5 to 9” life as a farmer.

His long hours pay off in box after box of pristine, bountiful produce he loads up for market.  David isn’t just interested in growing gorgeous vegetables though, he’s also committed to sustainable practices and preserving farmland.

While the weather and soil are in the valley are ideal for farming, he does admit there are challenges for young farmers here: primarily, the cost of land.  He says for young farmers “the dream of buying land in Sonoma is really more of a hallucination,” since agricultural land often reaches over $200,000 per acre.  One thing he wouldn’t trade about farming in Sonoma – he sends his fresh harvest to market just six miles down the road, where he knows customers will appreciate his hard work.

These young farmers, our newest generation of environmental stewards, are busy from sunup to sundown making sure our soil is rich, our land cared for, our bellies full.  How do we make sure they are also cared for?   It seems to me that we should be their stewards to insure they can do their good work in our community. How do we support them?  Start with buying their crops.  Visit their plant sales, farmstands, and market booths.  Then we’ll work on getting them farmland.  If you can’t afford to buy them a farm, maybe offer to buy them a beer for all their hard work? I’m pretty sure they’d appreciate it.

Stacey Tuel is a member of the Farmers Guild, vice president of the Sonoma Valley Grange, and a self-appointed “farm groupie.” Reach her at [email protected]

One thought on “Generation Ag: The new faces of farming”