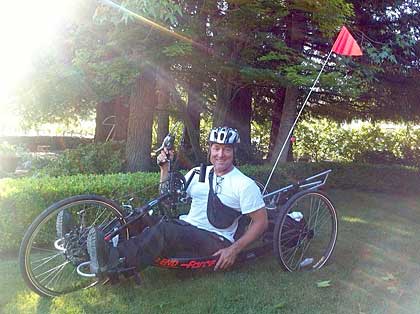 Jonathan Farrell | Special to The Sun

If you happen to be driving along Highway 12 between Glen Ellen and Sonoma, chances are you might see hand-cyclist Steve Brumme on his specially made three-wheel cycle moving swiftly along in the bike lane.

As an artist, a teacher, a martial artist, rock climber, cyclist and horseback rider, Brumme does not let any limitation prevent him from living a full life. Next on his busy agenda: the 900-mile End Polio Now bike tour.

“I contracted Polio when I was three months old in the 1950s.” Brumme said. “And since that time I have not settled for letting a disability or obstacle keep me from living a full and meaningful life.”

In fact, he said, the so-called disability “seems to have been a spring board that has helped catapult me into a life of adventure and wonder.”

Brumme wears braces, and when not on bike or horse he walks with crutches.

When you are faced with a real crisis, like paralysis, said Brumme, life gets real simple. “You make the choice to grow or you fade away. I have chosen to grow.”

Brumme will ride in End Polio Now ride that leaves the Sonoma Plaza at 10:30 a.m. on June 2. The ride heads to San Diego and part of the way back.

Sponsored by the Rotary Club of Sonoma Valley, The California Martial Arts Institute, The Challenged Athletes Foundations and Top End Wheelchair Invacare, the bike tour’s purpose is to raise funds and awareness about the ongoing fight against Polio.

Rotary International is dedicated to eradicating the disease world-wide by raising awareness and getting much needed vaccines and clean water to poor nations where the basic necessities of clean water, food and hygiene are lacking.

While current statistics show that less than 300 cases were reported last year globally, the threat of polio spreading is always present, particularly in remote regions. Countries like Nigeria, Pakistan, Afghanistan have been vulnerable to epidemic outbreaks for years; because of conflict and turmoil, aid and medical supplies have not been able to reach these areas effectively.

According to the World Health Organization, polio is a highly infectious viral disease. It mainly affects young children. The virus is transmitted through contaminated food and water, and multiplies in the intestine, from where it can invade the nervous system. The disease causes paralysis, which is often permanent. Polio can only be prevented by access to clean, fresh water, sanitary living conditions and immunization.

Brumme believes just as Rotary International does that even a small number of polio cases in the world is a concern. He feels it is important now more than ever to help raise awareness and confront complacency.

As a past local Rotary member he knew of Rotary International’s commitment to fighting polio. Brumme thought it important that he take on the challenge. Approaching the local Rotary chapter in Sonoma, Brumme spoke at a meeting about his intentions and asked for their endorsement.

“I was very impressed with Steve’s talk,” said chapter member Rie Casele, “he really didn’t talk much about his struggle with polio. It was more about his goals (to participate in the bike tournament) and what he believed in.”

Brumme has said that his primary motivation is to take on a challenging adventure that would help put an end to the disease. That 900-mile challenge begins in about two weeks.

To learn more about Brumme and the End Polio Now Bike Tour 2013, and to purchase raffle tickets to support his ride, visit his Facebook page.