The drive to succeed 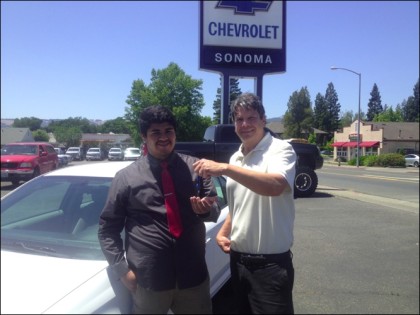 High school graduate Alberto Soriano-Morales takes the keys to his new car – which he’ll use to commute to Sonoma State University — from Mike Salmas of Sonoma Chevrolet.

Dealer Dan Roseland, continuing a tradition started by Bob Nobles, donates a ‘new’ used car each year to the Sonoma High School grad night, the on-campus event that keeps the grads safe and sober after the official ceremony. When his name was called at about 4:30 a.m., Soriano-Morales said he excited but tired – as was his family when he got home and woke them with the news. The new ride means he won’t have to use his parents’ cars anymore, but now has to work this summer for gas money for the upcoming commute to college.