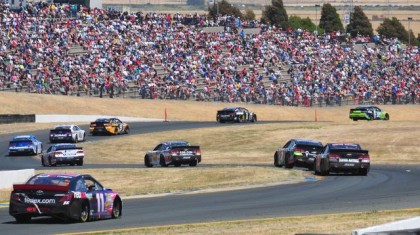 NASCAR returns to Sonoma Raceway with the Toyota/Save Mart 350 on June 27-28, in what is likely the last race here for local favorite Jeff Gordon, a five-time winner.

Weekend races and activities – including a fly-over, Arnold Schwarzenegger, a hot dog eating contest – culminate in Sunday’s finale, as some 40 drivers make 110 laps around the 10-turn road coarse at speeds up to 90 miles an hour.

The Toyota/Save Mart 350 is sure to feature its usual high-intensity, fender-banging action, June 28, and to set the tone for one of the most exciting races on the NASCAR Sprint Cup Series schedule, Sonoma Raceway has put together an unforgettable pre-race show featuring everything from jets to aeronautical aerobatics to live music entertainment. Pre-race will also include a tribute to Northern California native, Jeff Gordon, who will take his final green flag in Sonoma as a full-time NASCAR Sprint Cup Series driver.

There will be plenty of on-track action throughout the day, so fans should be sure to get tickets and arrive early, as pre-race entertainment will get underway at 10 a.m. on Sunday, June 28.

Listed below is what fans can expect during this year’s pre-race show:

Pre-Race Concert by Lindsay Bruce, 10:30 a.m.
Born and raised in nearby Santa Rosa, singer-songwriter Lindsay Bruce is the voice of California country. In 2014, Bruce beat out more than 60,000 hopefuls, landing a spot on Season 6 of The Voice, joining Team Shakira and working with Miranda Lambert. Bruce will perform a three-song set as well as God Bless America during pre-race festivities.

Jeff Gordon Tributes, 10:45 a.m.
Jeff Gordon is the undisputed king of the road course with five wins and five pole positions in wine country, the most of any driver. Sonoma has always been a special place for Gordon and Sonoma Raceway has put together a special tribute, both in the air and on-screen, for the Vallejo native. Fans should also be sure to wave their Hometown Hero rally towels on lap 24, in honor of Gordon.

Driver Introductions, 11:25 a.m.
The field of NASCAR Sprint Cup Series drivers will walk the “cat walk” before taking their pre-race parade lap. Be sure you’ve purchased your Pre-Race Pit & Track Pass to get an up-close look at driver introductions.

Save Mart Giant Shopping Cart
Save Mart Supermarkets will take its giant 12-foot shopping cart for a lap around the road course.

National Anthem performed by Morgan Karr, Noon
Award-winning singer/songwriter Morgan Karr will perform the national anthem. Karr, a native of Nashville, will appear in concert in Transcendence Theatre’s “Under the Stars” at Landmark Vineyards, Aug. 1-2.

Drivers, Start Your Engines!
Following all of this incredible entertainment, it’s time to fire up the engines for 110 laps on the Sonoma Valley road course! Toyota/Save Mart 350 Grand Marshal Kevin Jorgeson, who captured the world’s attention with his free climb of El Capitan in Yosemite National Park earlier this year, will help give the command.

Command Flyover
This year’s command fly-by will feature a P-40N Warhawk and three P-51D Mustang fighter planes. The planes have been brought together by VINTAGE AIRCRAFT, which is based at the Schellville Airport, Sonoma County.

NEW! Relax in the Shade at Turns 2 and 9
Sonoma Raceway has teamed up with Humboldt Redwood Company to construct two new “Grill Garden” seating and shade areas where fans can relax, cool off and enjoy a bite to eat during race weekend. These new areas, featuring redwood arbors, are located at Turn 2, near The Real. Strong. Humboldt Redwood Deck, and above the Turn 9 Terrace on the road course.

Tickets, parking and transportation are all still available for the Toyota/Save Mart weekend, June 26-28. For more information, call 800-870-7223, visit www.RaceSonoma.com or follow at www.FaceBook.com/RaceSonoma or @RaceSonoma.