By Cecelia Tichi / Special to The Sun

“Jack London Catches Fish with Diamond!” “Jack London Will Report Great Prize Fight for Herald!” “Author London Reaches Town for Operation!” The triumphs and travails of Sonoma’s celebrity writer were bannered nationwide in newspaper headlines in the early 1900s, while advertisers boomed his upcoming novels and stories with taglines like “A Great Author’s Greatest Story” and “Best Story He Ever Wrote.” 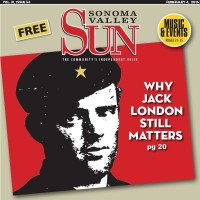 London’s career, what’s more, anticipates today’s reality TV shows, for he had many of the harrowing adventures that he cast in fiction, journalism and travel writing. His crewing on a sailing ship in the Bering Sea, his pitch-dark subzero winter in the Alaskan Gold Rush of 1897-98, his undercover journalism in London’s East End slums, his dispatches from the East Asian war zone in 1904, his month-long imprisonment in upstate New York on a charge of vagrancy, together with his perilous sailing voyage to Hawaii and the South Seas in 1907-08 and his sustainable ranching in Sonoma — all these became his literary credentials. They authenticated his writings, from “The Call of the Wild” (1903) to “People of the Abyss” (1903) to “The Sea-Wolf “(1904), “The Road” (1907), “The Cruise of the Snark” (1911), “The Valley of the Moon” (1913), and many others. Over some 50 volumes, the Jack London brand meant entertainment certified with authenticity.

Jack London once again summons us in the 21st century, this time for the uncanny coincidence of this deja-vu moment that links his era with our own. The America of today repeats many of the same conditions that defined Jack London’s time. He lived in the first Gilded Age of material abundance, technological superiority, global prestige, and economic growth—all undershot with stupendous wealth inequality, cycles of joblessness, treacherous workplaces that ravaged adults’ and children’s lives, farming practices that exhausted the soil, and a criminal justice system that rivaled Dante’s “Inferno.”

Renewed attention to Jack London‘s career reveals how a figure of enormous popular appeal and astonishing output exerted great leverage for social change in a critically vital historical moment, one that bears a remarkable similarity to our own time. The celebrated adventurer-author lived through, and triumphed over, brutal early years as a self-styled industrial “work-beast,” and by his early twenties he had a trove of personal stories ready to educate America, all based on his personal archive of social injustice that harmed individuals and the country. Embedded in his fiction was a mandate for social reform in the new twentieth century.

Born in 1876, London grew up in America’s post-Civil War decades when industrial and business tycoons such as John D. Rockefeller, Andrew Carnegie, J.P. Morgan and railroader Collis P. Huntington amassed fortunes from oil, steel, finance, and transportation. As London wrote, “The captains of industry are doing, molding, achieving, building the house that humanity lives in and is to live in.” Their extravagant lifestyles were widely reported in the press, from evening balls to seasonal ocean yachting. (At one gala, guests dug for diamonds buried in his or her individual sterling silver pail filled with sand.)

Their philanthropic foundations endure as important legacies, but in the tycoons’ heyday the millions at the opposite end of the social and economic scale survived on bare-subsistence wages and faced the destitution awaiting them with crop failures, job loss, injury or sickness. Child labor was rampant, work weeks typically stretched from 60 to 80 hours, and workers’ city housing was accurately termed a tenement slum. London later remarked that even in prosperous years “the bottom of the social pit” awaits “a well-fed workingman…who sees the shambles waiting for him and his children and recoils from the descent.” On the printed page and from the speaker’s platform, he asked, “Why are there 10,000,000 people in the United States today who are not properly sheltered and properly fed?” (At the time, 1905-06, the U.S. population hovered at eighty million.)

Jack London spent his boyhood and youth on these low rungs of the Gilded Age ladder. With his mother, stepfather and two stepsisters, he pitched in to help the family make ends meet in industrial Oakland, California, and otherwise on the agricultural peninsula south of San Francisco, where farm chores long preceded a dream of Beauty Ranch acreage in the Valley of the Moon. In Oakland, London worked the typical nickel-and-dime boyhood jobs delivering newspapers, setting pins in a bowling alley and helping on the ice man’s wagon. However, London also toiled as a child laborer in an Oakland jute mill (at a wage of 10 cents per hour), then stuffed pickles in a cannery where he saw coworkers’ fingers severed by machinery without safety gear. He resumed manual labor in an electric company’s boiler room where he shoveled towering heaps of coal until his sprained wrists swelled and throbbed (all the while he was duped into believing he was slated for the Horatio Alger future of great success). He also worked in a mechanized steam laundry where a visiting boyhood friend observed Jack’s frantic motions and proclaimed that his friend was now a “robot” and had hired out as a “slave.”

London also knew firsthand the horrors of joblessness, for the depression years of the 1890s found the future author, like legions of other young men, roaming the country as a hobo seeking an odd job that might provide a few coins or a meal. London’s mariner pals from the Oakland wharves, meanwhile, were either dead or serving time in San Quentin.

To find a viable future required a man to gauge possibilities within the capitalist industrial order, and so London, in his own words, “opened the books” and became what he called a “brain merchant” who “delivered to the market marketable goods.” His is a bootstrap story, but also one of mentors who guided him, notably the Oakland librarians Ina Coolbrith and Frederick Irons Bamford who helped introduce young Jack to the socialism that was espoused by such Victorian British writers as John Ruskin. In this 2016 presidential campaign season when the words “progressive” and “democratic socialism” are in the air, we are reminded of London’s own commitment to socialism, which was based on two principles: 1) that humans are social beings and 2) deserve a better political organization to improve conditions for everyone. The failing of the industrial-era tycoons, said London, was their “hostility” and aloofness from the world they had created, one of great wealth and abundance that ought to be widely shared. The country, London insisted, was in desperate need of “a healthier order of things.”

Careful not to pummel his fans with preaching or propaganda, London nonetheless embedded in his fiction the critique of the nation’s pathologies and the prescription for its “healthier order.” Couched in novels and stories, London’s reformist tutorials were welcomed in home parlors, dens, and sun porches, his readers largely unaware that the Jack London titles that occupied their leisure hours were textbooks exposing social horrors and promoting social change. His wretched wraith of a child textile worker in the story “The Apostate” recalls London’s own stint in the jute mill and deplores the fate of a child whose life is that of a machine part. And the underfed sled dogs in “The Call of the Wild” are reminiscent of the plight of harnessed industrial workers whose bosses freely cracked the whip. London’s critique was in synch with other activists also worked along the same lines for progressive change. Their efforts, however, were distilled in cold statistical charts and documentary reports. As a writer of powerful fiction, Jack London was uniquely set to play a doubly powerful role: both to educate and simultaneously to stir strong feelings to ignite change. As his fellow writer Upton Sinclair remarked, the purpose of fiction is to “alter reality.”

The message from Jack London was clear and heartfelt. The country’s laboring children must be freed from the factories, mines and mills and channeled to school. Adult workers’ wages must rise to a fair share of their contribution to the economy, and the workplace itself made safe for body and mind. Farming must not plunder the earth as if the field furrow were a version of the mine shaft. Modern prisons, what’s more, must not trap and torture hapless individuals as in the dungeons of the feudal past. The U.S. status quo, London knew, must radically change, lest legions of Americans face futures of social turmoil, tragic deprivation, and relentless but unstable toil.

Now, in the centennial of London’s death, 2016, his fictional map of the first Gilded Age measures of how far we have advanced — or have stalled, at some points verging on free fall as we learn that presently 1.5 million American households, including some three million children, are living on $2 per day, according to researchers Kathryn Eden and H. Luke Shaefer, authors of the new book, “$2 a Day: Living on almost Nothing in America.”

Today’s digital revolution, with such keywords as Microsoft, Apple, and Amazon (and the matching names Bill Gates, Steve Jobs, Jeff Bezos) can also beam the light on Jack London’s era and help us focus on present conditions. Today, Jack London calls us to continue his mission to move both hearts and minds for the better America of the future.

Cecelia Tichi is the author of “Jack London: A Writer’s Fight for a Better America”