The kids are alright this summer at Jack London Park 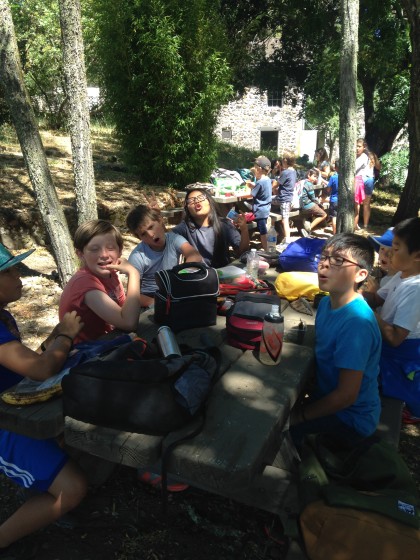 (By Jonah Raskin | Special to The Sun) Fifty-one years after Roger Daltrey, Pete Townshend and the rest of the British band, The Who, first performed their hit, “The Kids Are Alright,” the kids are still alright. They were alright on a field trip to Jack London State Historic Park in June. There were about 60 of them, all students, aged four to nine, at Woodland Star Charter School on Arnold Drive in Sonoma. They went to the park to learn about Jack London and about local ecology, geography, botany and history. Seven teachers accompanied them: Stacey Tuel, Bill Kobabe, Tiffany Burningham, Becky Traum, Monica Conway, Robyn Demeter and Vaunda Goodwill. I went with them to provide a bit of London lore and legend.

That’s what happens when kids go on a field trip to a park. Jack London, the author of The Call of the Wild, who died in Glen Ellen in 1916, would have approved. A wild man and an inveterate adventurer, as well as a best selling author, London never had the kind of boyhood that the students at Woodland Star enjoy.

His family sent him out to work and so he worked and worked and worked until he vowed never to work again. As a teenager, he left home, became a hobo and traveled across the United States by rail and never paid for a ticket. The word “hobo” fascinated the students from Woodland Star.

Once they’d heard it they couldn’t stop saying it. The word “hobo” echoed across the park. In groups of two and three, the kids talked about becoming hobos and following in Jack London’s footsteps. They wanted to see America and see it as hobos who carried all their belongings on their backs.

They had plenty of questions about Jack London. “How did he write 50 books in about 20 years,” one boy asked. Another wanted to know, “Why did he die at 40?” The last question was difficult to answer. One can’t tell five, six and seven year olds that London was a mess and depressed and didn’t want to go on living. So the answer they heard was, “he smoked and drank too much alcohol.”

The answer to the first question was easier. “He had a vivid imagination,” the London scholar told them and pointed to his own head. The students got. They knew about the imagination and they used their own in thank you notes they wrote to the scholar.

“Many of the students had never been to Jack London State Historic Park and they live in Sonoma,” Stacey Tuel said. “The field trip helped to give them a sense of place and encouraged them to explore and to be adventuresome without getting into trouble. It’s a fine line. The students were able to recognize and identify birds like turkey vultures and plants like poison oak.”

Sometimes it helps to get out of the classroom and into the wide world of nature. And sometimes it helps to go wild, though one’s teachers say the exact opposite. There’s nothing like the sense of freedom when you run across a field and through the woods.
Jack London State Historic Park provides kids with the opportunity to learn abut the past and about themselves. The kids showed the park that they were alright.