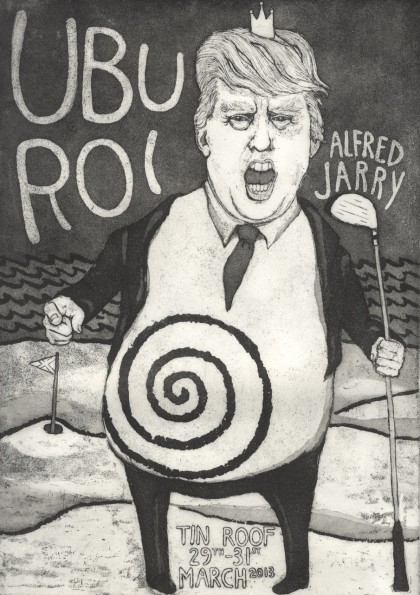 In 1895, Alfred Jarry’s play entitled Ubu Roi (The King Ubu) was performed in Paris for its first, and until very much later, its last time. Public reaction to the farce was so extreme that a riot ensued. Jarry, who never wrote another play, had no idea that a century-and-a-quarter later his theatrical exercise in gallows humor would come to life in the ascension to power of Donald Trump.

In his play, the vulgar Ubu conquers Poland (which literally translated means “nowhere”), and thereupon proceeds to display his childish and churlish manner over finances, wealth and warfare. Author Jane Taylor describes Ubu thusly: “the central character is notorious for his infantile engagement with his world. Ubu inhabits a domain of greedy self-gratification.”

Variously described as self-serving, gluttonous, grandiose and cruel, in Jarry’s burlesque world Ubu’s actions are normalized. The characters around him and Ubu himself seem to inhabit an alternate universe.  As Taylor notes, “While Ubu may be relentless in his political aspirations, and brutal in his personal relations, he apparently has no measurable effect upon those who inhabit the farcical world which he creates around himself. He thus acts out our most childish rages and desires, in which we seek to gratify ourselves at all cost”

A macabre political comedy, Ubu Roi has reappeared in various forms of theatre, metaphorically used to convey the absurd and horrifying atrocities committed by modern despots and regimes. As a measure of how surreal the 21st century has become, America’s own Ubu Roi has come to power in the person of Donald Trump, and to many he seems acceptable, even normal.

Thus we are subjected to Trump’s Ubu-like, foul-mouthed degrading of others, grandiose displays of wealth, sexual boasting, impetuous and disconcerting tweets, and the appointment of a rogues gallery of unqualified barbarians to positions of power and authority.

In his classification of social classes, the 19th century English critic Mathew Arnold designated the middle classes “Philistines” and the lower classes the blameless “Populace.” For the upper classes he reserved the name “Barbarians,” those who by the swipe of a pen or casual wave of the hand consign countless others to lives of misery or death. Ubu Trump and his band of gold-plated, billionaire barbarians inhabit the alternate universe Jarry imagined, a monied class insulated from the day-to-day reality of hard labor, low wages, poor health, lack of housing, street crime and insecurity.

Arnold’s prescription to cure the anarchy of sick society was culture – humanities and the arts – and undoubtedly, the rise of America’s Ubu will stimulate an impressive outpouring of artistic creativity. Facebook is already filled with satire, and artists and performers find no shortage of subject matter with which to pin-prick the bubble of Ubu Trump’s alternate reality. Ultimately, however, more than satire is necessary.

If, as some say, we now inhabit the post-truth era where fake news enjoys as much traction as reality, then only something stronger will penetrate social consciousness. The risk is that this will be, as has happened before, identification of scapegoats, state-sponsored violence and aggression.

Alternately, a non-violent spirit of resistance grounded in generosity, compassion and sacrifice – in short, reliance on the caring values of family and community – might do the trick. The emperor, Ubu Trump, has no clothes, and it is up to us to call attention to his naked ambition.