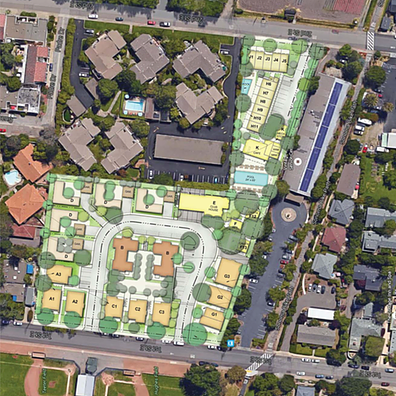 Sonoma-based Caymus Capital has proposed a mix-use development, with hotel, restaurant and residential units, on a 3.4-acre parcel that runs between the 200 block of First Street East (at bottom) to Second Street East.

FOR by Bill Jasper

The proposed First Street East project will be formally presented to the city for approval in the coming months. For over two years a great deal of planning, listening, and revisions based on community input, have gone into the submittal. Dozens of community outreach meetings have been held and the project has substantially changed in nature to respond to these concerns.

Throughout this process many comments have been made more on personal feelings than on the facts. Rather than listen to proposed plans people have jumped in and tried to deter the project based, in my opinion, on emotional rather than reasoned consideration after hearing all input.

The facts to consider: 32 more families, retirees and our work force will have homes in Sonoma. The homes are senior friendly, and the work out and pool facilities provide for a healthy and active life style. The boutique hotel has only 30 rooms, five more than Measure B’s target goal for new hotels. The pool club is a community asset, that families will enjoy and that will used by the Vintage House for water aerobics.

The density of the development is far less than neighboring developments, and the buildings sit much more gently and appropriately on the land. The style of the buildings are farmhouse in design in deference to Sonoma’s agricultural history, and will be a much more appealing site than the current structures. Little League will have new landscaping and benches for fans to sit under new trees to watch the games. A right to play covenant will be put on the deeds of each home to further support Little League.

The new restaurant is open to the public, and will be a welcome option and additional draw for both locals and visitors alike. A small coffee bar will sit on the corner by the bike path, for the community to take a break and enjoy Sonoma.

Opposition has had two salient concerns that I’ve heard: 36’ tall buildings will change skylines and traffic will increase. These buildings are located next to a large tree line that is taller than them, even so these buildings are 4-6’ taller than neighboring buildings. To me that seems a modest request to house more families.

Traffic will be discussed formally as part of a traffic study being conducted by the City, which is the correct way to address this concern.

Based solely on the facts at hand, the evolved version of the project, as it is currently being proposed should get approval. It clearly meets the goals of the general plan and complies to all city planning requirements including density, safety, parking, codes, etc.

But I want to make one other major point about this project – the economic impact on the city. This is the reason I supported the developer, when they suggested we add a boutique hotel to the original plan for all residential housing; which is what I invested in. I was skeptical at first, but did my own homework.

I encourage readers to do the same, and look into the aspects of smart urban planning by watching a short video — HVD01WUm0oA – on YouTube. Spreading a city’s business and services further out from its center is a recipe for increased traffic as well as making it more expensive to support the infrastructure. Smart planners today are focused on building pedestrian friendly density, not sprawl.

Neither the city nor the school district can solve these shortfalls given their current finances. Yet every one of these issues is part of the fabric which makes Sonoma a special place to live.

So how do we solve this overall problem? The First Street East project is a solution which will put additional funds in our city coffers, in our schools, and that bring jobs to the local workforce while being in conformance with code and re-designed to minimal impact on the quality of life of citizens. As such, it deserves the type of consideration that you would give any opportunity to better our community.

AGAINST by Karin Skooglund and the Protect Sonoma Committee

What would you do if a developer bought a significant portion of your neighborhood, planned to demolish all of the existing structures, and build an enormous mixed-use complex – including a large hotel and three story buildings – in its place? You’d probably want to learn more.

As you learned more, what if you discovered that the project as proposed is incompatible with your neighborhood and violates many elements of your town’s development code, general plan, as well as the unique history and goals for the property?

You’d probably want to make sure the planning commission and city council took seriously their responsibilities to uphold our town’s governing documents.

Finally, and most importantly, what if this neighborhood wasn’t just where you lived, but where our kids played baseball, where local seniors met for activities, where families have birthday parties, where historic resources are treasured, where local produce is grown and where family and friends are laid to rest. In short, what if this neighborhood was our town’s “backyard”?

You’d organize an effort to stop this project before it goes any further. And that’s what we’ve done.

We represent “Protect Sonoma” – an action committee of the North of the Mission Neighborhood Association. We have formed this group with the goal of stopping the First Street East Project (“FSE”) as currently proposed, not just for our neighborhood, but also for our entire Valley. Please join us.

If you haven’t already heard, as proposed, FSE is the largest, densest, potentially most destructive project proposed near our Historic Plaza in the past three decades.

On 3.4-acres north of the Vintage House, east of our Little League fields and west of “The Patch,” the developers (Ed Routhier, Bill Jasper and Caymus Capital) plan to build a 30+ room hotel, 32-residential units, a private pool club, spa, restaurant, and associated commercial outlets (coffee, sundry shop, etc.). Many of the buildings will be three stories.

There are many significant problems with this project. A hotel and restaurant are inappropriate land uses and appear to violate the development code. Three-story, 36-foot tall buildings also do not comply with the code for this area and would be incompatible with the neighborhood. The project would certainly add traffic to an area that can’t handle much more. Placing this massive project on two small streets with no east-west outlet also represents significant safety concerns for all those that use the area. The developer’s parking plans include urban solutions usually found in San Francisco or Manhattan, like valet, tandem parking and hydraulic lifts. The project also threatens not only the historic integrity of the property but also the fabric of the forthcoming “Sonoma Historic Train District.”

All of the issues with FSE stem from the fact that the property is zoned “mixed-use”, as a result of a unique historical circumstance. Specific directives and checks were placed in our development code to ensure that developers wouldn’t be able to exploit this designation. Learn more about this story at protectsonoma.com, including the text of a City Council ordinance in 1996 that said, “it is the intent of the City Council… not to allow the encroachment of commercial uses that would alter the existing residential character of the area zoned Mixed-Use… generally described herein as the “North of the Mission neighborhood.”

The developers also like to emphasize the “economic benefits” they claim this project will bring to Sonoma. In a letter to the Planning Commission in March 2016, Bill Jasper argues that we should, “approve projects that put additional funds into our city coffers.” Mr. Jasper has every right to make this argument, but a closer look at the numbers show the primary economic beneficiary of this project will not be the city, or our schools, but himself. He has every right to defend his significant investment, but Sonoma is sophisticated town, and we know when we are being misled.

Mr. Jasper and his team also like to deride our group as “NIMBYs” – “Not In My Back Yard” protestors. But this isn’t just our backyard. If the Plaza is our town’s front yard and primarily for visitors, this neighborhood is our town’s backyard, primarily for locals. This neighborhood is an authentic part of Sonoma’s soul, and should not be sold out.