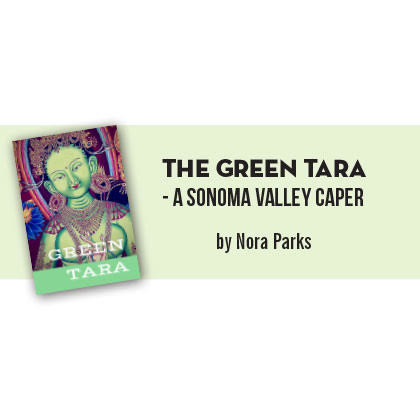 Somewhere near downtown Sonoma, a set of false teeth hides a clue to the unsolved mystery of “The Green Tara” – a famous emerald necklace, now missing. When a sophisticated forgery is discovered, a beleaguered Sonoma mother-of-five enlists the help of an eccentric starlet, a washed up crime writer, and a guerilla horticulturalist to find the true Green Tara before a gang of aging jewel thieves beats her to it.

At 5:45 a.m. on a Tuesday in early April, twelve marine biology grad students huddle on the dock in San Pedro harbor with their professor, Dr. Anthony Kohout. Kohout is a handsome man in his mid-fifties with thick, silver streaked hair and a 1970s newsroom mustache. Of late, however, his reputation as a renowned shark researcher has been eclipsed by his own predatory exploits. That most of the graduate students selected for this prestigious program are female comes as no surprise to anyone.

Their destination is Catalina Island where the students will begin several weeks of study with Dr. Kohout and a few doctoral candidates working on sea level rise who have been on site since early winter. As they wait to board the university’s research vessel The Walrus, the boat captain gives a lengthy safety talk and tells them that before the boat’s conversion to research vessel, it belonged to a commercial fisherman who’d moonlighted as a carpenter. Only one student gets the joke and attempts to explain it to the others but quickly gives up when the boat’s exhaust hits her. She downs a Dramamine with a sip of black coffee, and gags.

In recent months unusual animals have been appearing in the near coastal waters of Southern California, swimming in on unusually warm currents. Of particular interest to Kohout’s team is the diversity of shark species appearing in new places, sounding the alarm at swimming and surfing spots previously considered safe from apex predators by a massively uninformed public. And, as everyone knows, Kohout is getting a little under the table funding from the good scientists of Shark Week.

The students, Dr. Kohout, and an underwater photographer named Tiffany board the boat with their gear and equipment. The captain follows a juvenile blue shark for a while as they make their way slowly out of the busy harbor. Tiffany has been asked to come along to take pictures for the upcoming issue of the alumni magazine. While The Walrus idles in a line of boats, she suits up and dives in hopes of capturing a good cover shot. She floats at the threshold of an unknowable, abyssal dimension while the blue slowly circles.

At a depth of about eight feet, the shark turns towards her, suspended in the still, dark water, as if posing for the camera. Reflected in the shark’s steely eye is the sublime indifference of the underwater world to the whole of human life and suffering on land. She takes her shot just as something darts across the shifting light, startling the shark.

As Tiffany will later tell the reporters, precisely at the moment that the shark races off, something else catches her attention – an object half-buried in the sand, glass bottle-green, and glinting in the weak, penetrating rays of the sun.

Tiffany dives back down without saying a word to anyone, forcing the captain to idle in a narrow channel. When she resurfaces, Dr. Kohout leans over the railing to extend a hand but stops short. Astounded by both the emerald brilliance and the impossible discovery of what dangles in the photographer’s free hand – a treasure he relieves her of immediately – Kohout is the only one on board The Walrus to miss the juvenile great white that brushes against Tiffany’s fin as she waits on the bottom rung of the ladder to ascend. 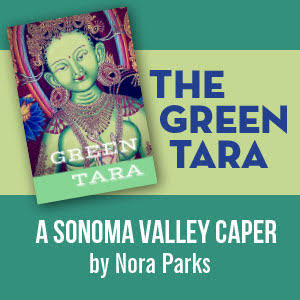 A stoop with a view

Mid-May. In a small hamlet nestled in a picturesque valley in the Northern California Wine County, Rachel Fischer-Alvarez sits on the top stair of her front stoop, soaking up the drops of sunlight filtering through a half- dead mulberry, and basking in this rare moment of silence. Having dropped the kids off, washed the dishes, made the beds, showered, fed and walked the dog, wiped down the toilet seats, fed the much anticipated cat (missing three weeks now), disposed of the science projects in the refrigerator, and answered emails all by nine a.m., the rest of Rachel’s day is an Odyssey. With her knees tucked up under her chin, she nurses a cup of lukewarm coffee and stares at the sorry state of her feet. Her heels are cracked and the toenail polish chipped; her feet are, like the rest of her, awaiting some attention.

The stoop is Rachel’s favorite spot. Unlike proper urban stoops, this one does not project outward onto a vibrant, living theater of a neighborhood. It is more of a dressing room. Since neither she nor her husband Rob has bothered to prune the privet hedge for at least a decade, she can now sit on the stoop in her pajamas, camouflaged in the foliage like a nesting duck.

The grapevines have grown so heavy that she fears the supporting trellis might come down and leave the front of her house naked before the world, exposing its shameless architectural origins to every passerby. Years ago the bare winter vines were discovered by roof rats that to this day use the horizontal branches as a kind of rodent mass transit system, connecting the adjacent field with the warm sanctuary of the Alvarez attic. The creeping roots of time and neglect are reclaiming the crumbling steps of her temple before her very eyes. And yet, there is some beauty in this too.

The house itself is a rancher, built on spec sometime during the late 1970s on a quarter-acre of adobe clay – an artifact of a bygone era when the townspeople of the valley had made a living in the fields and vineyards instead of pimping virtual reality wine country living. Rachel, who’s had as many low-paying service industry jobs as anyone, understands perfectly well that this bucolic fantasy is made possible by an invisible, systematically exploited, gratuity-dependent labor force who live in collective dread of tourists from Alberta; there is only so much a Californian can say to a Albertan before the topic of hockey comes up, and only so much small talk one is inclined to make in a tasting room or spa without even the smallest chance of a tip.

Prior to the development of Buckeye Creek Estates, the fifty-acre subdivision that surrounds the Alvarez house was a turkey farm that endured a brief conversion to an artist’s colony whose members used the coops as studios. The parties that took place at “The Farm” are still talked about in certain circles, but Rachel is the Pluto of these solar systems.

Rachel and Rob were already living in their house when Buckeye Creek exploded all around them overnight into two sprawling tracts of homes distinguishable only by their names – the “Merlot” model, the “Chardonnay” model, and the “Zinfandel” model.The Estates are more of a colony of boxes than a neighborhood; the “estates” remind Rachel of Happy Meals.

The entire tract drains out onto a fifty-foot long section of asphalt in front of Rachel’s house where, in the depression between the driveway and asphalt, a seasonal wetland springs to life when it rains, habitat for a rare hybrid species of condom wrappers and Jiffy Lube coupons. Rachel is thankful that none of her children have contracted any of the dormant plagues incubating in this fetid little pond. Rachel’s husband Rob is known, on occasion, to pour diluted pool chlorine into the water, right next to the hand-stenciled sidewalk sign that reads “No Dumping, Drains to Creek.” This is an act of ecological warfare that might otherwise enrage Rachel if it weren’t for the fact that the creek is already a dead zone, contaminated by vineyard runoff that has killed everything but the Norwegian rats – an invasive species with a population approaching biblical proportions following County budget cuts. So much for Paradise.

To be continued in next issue of The Sun, Thursday, June 1