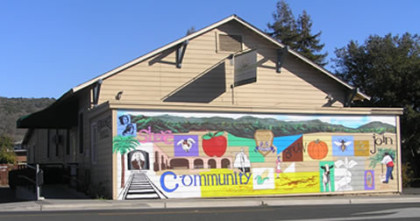 Any day now the hall on Highway 12 across from Mary’s Pizza, formerly known as the Sonoma Valley Grange Hall, will be adorned with its new “Sonoma Springs Community Hall” sign.

The hall is finally open for public use again after more than two years of renovations. It was a project that took a lot longer, and cost a lot more, than originally anticipated. But that’s often what happens with old buildings. The former Grange Hall, which started out as part of a resort, is roughly 100 years old.

The project has been a labor of love for the Sonoma Springs Community Hall members who had a vision of upgrading the hall into one that would not only be a community meeting and gathering space, but would be a force in local economic development. A significant upgrade to the hall is the installation of a commercial kitchen. The kitchen is available for local food purveyors to rent.

A special shout out of appreciation goes to the Sonoma Valley Rotary, who donated $20,000 for the commercial kitchen. Prior to Rotary’s donation, the ability to re-open the hall was lingering, because the county building department wouldn’t issue an occupancy permit until the kitchen was finished.

Even though the hall can be used again, there’s still more work to do. If you’ve been by it lately, you likely noticed the black plastic on the roof. Sonoma Springs Community Hall president Seth Dolinsky said about $30,000 is needed for a new roof and to possibly install solar panels.

Other key players who made the renovation of the hall possible are Mac and Leslie Mcqown of Stonedge Farms who contributed $100,000, Jim Callahan, a very long time Grange member who led the construction committee and donated his construction expertise, and Bridges Construction, the general contractor.

President Dolinsky said, in addition to the financial support, “this project really could not have happened without the numerous volunteers and generous contractors that pitched in time, energy and resources.”

As a member of the Sonoma Springs Community Hall, I want to say a big thank you to our president. Dolinsky led us through this huge project, contributing countless hours of his time, and with Jim Callahan, kept us on track to reach the goal.

So what does this mean for the future of the Sonoma Springs Community Hall? “We are following legal developments, but are mainly focused on restoring this hall, built and paid for by Sonoma Valley citizens, and putting it to use in the spirit of our historic mission,” Dolisnky said. “That mission is healthy farms, healthy food, and healthy community. Without any of these, a community can not truly be sustainable.”

Dolinsky also points out that the Sonoma Springs Community Hall is “only as strong as its members.” He hopes more people will join and get involved.

To learn more about the Sonoma Springs Community Hall, and to see the beautifully renovated facility, attend the free open house Friday, May 19, 5 to 7 p.m. There’ll be refreshments and live music.