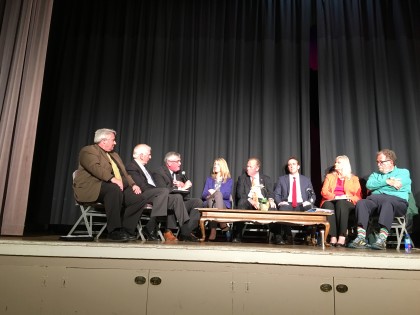 By Anna Pier | Sonoma Valley Sun — Six elected officials and two government staffers couldn’t put Highway 37 together again. The panel re-hashed the problems of traffic and flooding, touched on privatization and public-private partnerships, responded in brief to a few public questions, and wrapped it up without moving anything along.

The state highway is not due for CalTrans attention until 2088. Any large-scale improvements before that would, several panelists said, would require alternate funding.

Dodd, Rabbitt and Smith said a toll road is inevitable.

Supervisor Gorin offered a strong and sometimes scrappy analysis of what’s important. She was applauded for pointing out the undue burden of tolls on the many local workers forced to live in Solano County due to Sonoma County’s failure to meet the housing crisis.

Her consideration for low-income drivers compelled to choose alternate routes contrasted to the prevailing attitude of panelists who called them “toll evaders.” Gorin also pointed out that making SR 37 a toll road creates sends the problems of congestion and wear to the alternate roads.

When the discussion turned to sea level rise Gorin stood by her assertion that part of the SMART rail will be underwater, even though contradicted by Mackenzie. She also served up a challenge to Sen. Mark Levine for more housing in Marin.

Although the event at the Veterans Building was billed as an opportunity for pubic comment, the moderator presented the panel just nine questions submitted by the audience. The first asked about a means test to evaluate effect of tolls. Mark Levine responded that there had been no means test for the recent SB1 gas tax increase, nor for toll increases. He affirmed the need for such.

Regarding what steps would ensure new work would be wildlife friendly and environmentally safe, Suzanne Smith met the question with a question: “How would we pay for an environmental study?” She acknowledged, “If we’re going to build a legacy project we want to do it right,” and spoke of relying on resource agencies.

Private property owners along Highway 37 asked about a toll waiver and, more significantly, access to the highway and how their property will be protected if the sea wall is removed.

Alternative modes of transportation were proposed: a Vallejo-Larkspur ferry, and upgrading the freight tracks from Novato to Fairfield. Another questioned how the impact on Highways 121,12, 29 and 221 would be addressed.

One person wondered where was Solano County in this, and if the four counties can work together? Supervisor Rabbitt replied that Solano is very involved, in fact seeking to be the lead county.

Another audience member wondered how to create housing so people live closer to where they work. Susan Gorin underscored the issue, noting 800 applications for the 60 units in the new affordable Fetters Apartments. The County plans 33, 000 new units in the next thirty years.

The futility of the evening became clear when panelists were given a minute to name their top priority and “what they would most like to see to get it going.” Rep. Thompson, who earlier lamented losing “earmarks” that might have enabled him to get Federal funding, promised, “I’ll do my best.” Most panelists reiterated the premise of the forum: the present traffic situation is unacceptable.

Dodd, Rabbitt and Smith said a toll road is inevitable. McElhinney called for “innovative design and financing.” Smith and Gorin reiterated the complexity of the problem.

Mackenzie concluded, “The cast of characters is working together like a great machine and I believe I will live to see a new Highway 37.”