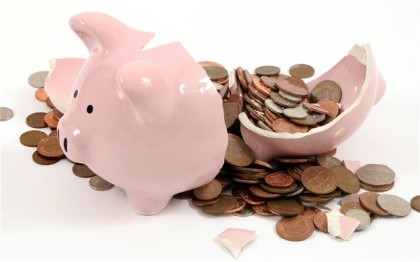 Over the next six to seven years pension costs to the City of Sonoma may balloon by well over 300%, rising from $1,467,041 in fiscal year 2017/18 to a projected $4,827,039 in 2024/25. As a percentage of available unrestricted General Fund revenues–forecasting a yearly increase of 103% but excluding operating and emergency reserves–by 2024/25 the city’s pension obligation could equal nearly 30%. Today’s pension obligation represents less than 10% of unrestricted General Fund revenues.

These sobering conclusions are the result of an analysis by the Sonoma Valley Sun of the pension obligations of the City of Sonoma to its various employees, past and present, based in part on data reported by CalPERS, the entity managing the city’s pension plan, and forecasts based on historical financial reports of the city (see Notes below). Notably, during the City Council’s recent goal-setting meeting, City Manager Capriola reportedly mentioned that any added revenues received from any increase in TOT (Hotel Tax) would eventually be needed to fund the city’s pension program.

The city’s pension program represents a long-term government obligation. Depending upon how employees are classified (including contracted employees such as Fire and Rescue Service, Sheriff’s Department and non-contract Miscellaneous) the full payment obligation can begin as early as after 25 years of government employment, Pension benefits accrue with each year of employment at a rate between 2% and 3% per year, depending upon job classification. Employees currently make a contribution to their pension plan, roughly equal to the amount contributed by the city, though in the past the city assumed the entire contribution amount.

An as example of how benefits accrue and are paid, a 30-year managerial employee earning a highest average salary of $175,000/yr. over five years would receive a pension benefit of roughly $105,000/yr. in perpetuity (2% times the number of years of government employment, times the highest five-year average salary).

Since the passage of a California pension reform act in 2012 (PEPRA), the city provides a second-tier pension plan for employees that requires a higher contribution from employees and reduces benefits, but those who have been employed prior to the implementation of this second-tier plan will generally continue to receive the original plan payments from the city in perpetuity upon retirement. 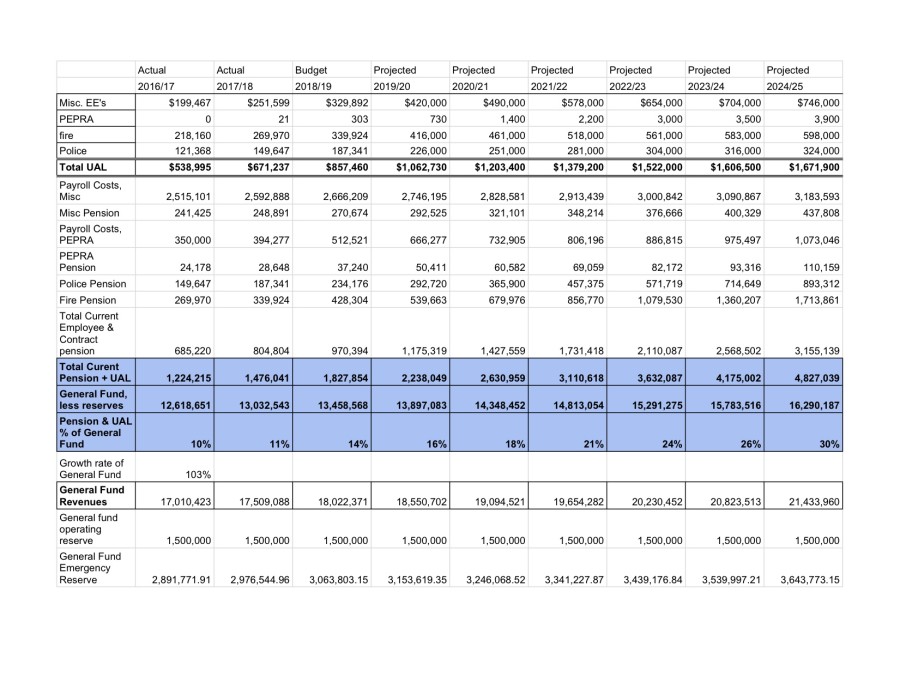 The city participates in the statewide CalPERS program (California Public Employee Retirement System), which pools funds from the participating government entities and invests those funds to generate profits that can be used for the payment of pensions. However, CalPERS recently altered their formula for a return on their investments; the lower interest rates being generated on government bonds and other conservative investment vehicles in which CalPERS invests has resulted in lower overall returns. To solve this problem, CalPERS has lowered its target return from 7.5% annually to 7%, and to compensate for that, increased the amount each participating entity must contribute to the pension program, effectively raising the cost of pensions for all cities in the program by 5%.

Given that Sonoma’s accumulated pension reserves are significantly less than what they should be, the City of Sonoma currently earns a “D” rating for its accrued pension funding, according to a CalPERS formula. This can have a negative impact on the city’s credit rating and its ability to issue bonds or borrow funds. Moreover, unresolved issues like past water-rate overcharges and Water Fund money transfers may negatively impact the future fiscal resources of the city.

Given this dire scenario, some options facing the City of Sonoma might include (1) offering early retirement programs to long-term employees, (2) sharply reducing the number of its employees, and/or (3) accelerating economic development that generates additional revenue. That last option carries its own uncertainty, however. Sonoma is a small town and unaccustomed to rapid or major economic growth; large hotel and other high-intensity commercial projects are subject to public objections, appeals or even voter elections. Moreover, given the size of the existing unfunded pension liability, it’s unlikely any development solutions can generate the volume of revenue needed to meet the city’s pension obligations within the next six years. Moreover, the region’s overall economy is subject to periodic highs and lows; financial projections become less accurate as a forecast becomes more distant.

Due to the properties of compounding interest, front-loading as much revenue as possible into its pension plan reserves could have the greatest positive impact on the city’s future pension obligations, potentially saving millions, but major revenue to inject into its pension plan is not an the horizon; the city is hard-pressed for cash. Despite community hopes for swimming pools, additional affordable housing, open space acquisition, assistance to non-profits, parking improvements and other major civic projects, unless Sonoma’s pension obligation problem is solved, it will dwarf everything.

We asked Stanley Cohen, a certified public accountant and former Mayor of Sonoma to review this analysis and comment upon it. “Financial projections based upon the Sonoma Valley Sun’s analysis of information from CalPERS,” Cohen stated, “have left me astounded to see our small village that had accumulated millions of reserves to be in the financial position it is in today. As Mayor,” he continued, “I opposed any money being given to non-profits until I was assured the city could meet its financial obligations. Based on these forecast calculations, the city will be forced in the future to have no employees or enact its own real estate taxes in order to meet its pension obligations. The most drastic outcome is bankruptcy.”

As with any financial forecasts, those contained in this report are based on underlying assumptions. The Unfunded Accrued Liability (UAL) Pension increases are based upon the Actuarial assumptions found in CalPERS’ reports. However, it is impossible to know the precise actuarial assumptions used by CalPERS as they are highly complex; we can reasonably assume some of their assumptions have to do with the population demographics of the retirees, the current fund balances for each retiree, the contractual defined benefit, expected returns and expected length of time over which those benefits will be paid.

For miscellaneous and PEPRA employees (PEPRA covers those employees hired after the 2012 Pension Reform Act) the calculations are based upon the stated contribution rates found in the city’s budget and actuarial reports. Assumptions are based upon payroll data provided and the historical, annual growth of combined payroll and cost-of-living increases of 3%.

For Police and safety personnel, the current pension costs reflect the information in the previous audit; the budget and forecast are based upon the historical growth rate of change extrapolated to the fiscal year 2024/25. This rate of growth is supported by history, stated expectations provided by CalPERS in various press releases and circular letters to participating employers of reduced rate of return on investments.

These are also fairly conservative estimates as CalPERS last month announced that it was shortening the amortization period for pensions obligations from 30 years to 20 years, the effects of which will not be known on municipalities until later this year as the actuaries work through these calculations.