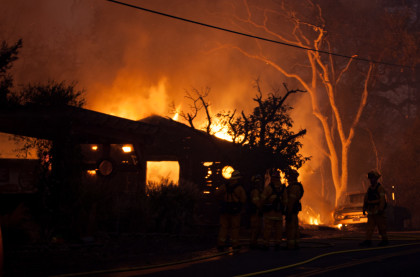 The October fires in Sonoma and Napa counties claimed the lives of over 40 people; thousands of homes and structures were destroyed. The process of clean up and rebuilding subsequently began, but the aftermath of the tragedy has sparked new heat: who to blame.

Even during the fires the news media was quick to suggest that PG&E may have been responsible for the local fires, but that has yet to be determined officially.

Cal Fire, the state agency in charge, is currently investigating 21 separate fires. On May 25, it issued its first report. It alleged that Pacific Gas and Electric Co. failed to remove and cut back trees around power lines, a cause of three wildfires in Butte and Nevada Counties in October.

Locally, KTVU reported the morning of the fire that the energy company may be behind the cause of the fires. This was clearly supposition on the part of KTVU as the story was literally unfolding but soon after, other news media outlets joined in the chorus of suspicion of PG&E..

This focus from the media has attracted the attention of lawyers from across the country who have since made a pilgrimage to the west coast. An army of enterprising attorneys have set up shop in Santa Rosa and have taken aim at the energy giant.

PG&E is defending itself on multiple fronts. First running an aggressive ad campaign profiling how it interacts with the public; second issuing reports to the media and the public on its website regarding its diligent maintenance of its equipment, trimming back or removal of over a million trees a year, spending billions of dollars a year to constantly upgrading its equipment to meet the needs of its customers. A third defense is its claim that climate change has altered the overall conditions which has made it more taxing on equipment that was designed and installed before the climate change phenomenon occurred.

The fourth line of defense for the energy company has been in Sacramento. The doctrine known as Inverse Condemnation is a mandate that PG&E wants repealed. California is the only state to have such a rule, and it states that in essence that even if PG&E did everything right regarding maintenance and prevention it can still be held liable for damages and legal fees during an event like a fire.

PG&E is not the only company that wants this law removed: San Diego Gas & Electric has joined forces with PG&E, and there’s talk that SoCal Edison may also chime in as it is facing its own lawsuits in Southern California regarding the fires they faced last December.

Cal Fire has the responsibility to conduct an investigation as to the cause of these fires. On May 9, of the agency hosted a press conference in Santa Rosa during its “Wildfire Awareness Week.” Represented were Cal Fire, Santa Rosa Fire, Sonoma County Sheriff’s department, and city and county politicians, including Santa Rosa Mayor Chris Coursey, who expressed his frustration regarding the snail’s pace in receiving FEMA financial relief.

Cal Fire focused primarily on the public at large, with to always stay vigilant on fire safety and suggested several common sense ideas for home and property owners.

City and county officials echoed these ideas and went further saying that they are considering enacting new laws that would obligate home and property owners to maintain their land under new fire safety laws that mandate fines or liabilities if a fire stemmed from their property.

According to PG&E, based on the limited information they have so far, the utility believes that they have still met the safety standards issued by the state of California. If PG&E has any disagreements with these reports, they will take those disputes to the California Public Utilities Commission, the state agency that oversees the energy company.

Ahead is likely a long and drawn out battle in the courts that could last for years. There have already been a multitude of lawsuits filed by plaintiffs to the tune of tens of billions of dollars, and that figure could ultimately exceed hundreds of billions.

One thought on “Heat on PG&E as fire investigations continue”