Under the Sun: Arthur Dawson, after the fires 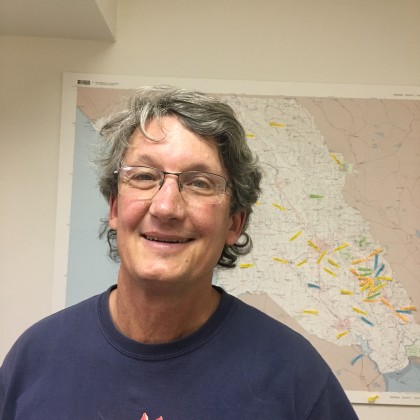 You’re a poet, as well as an historical ecologist. Have you been writing about the fires, about losing your home?

I’ve have been writing articles for the Kenwood Press. Recently I talked about the trips we took, both gifts from friends. These took us away from “Burnville”  – one to the green East coast, and the other to Kaua’i. The island was in the aftermath of a hurricane, and the community response to the survivors reminded us of home. But no poetry. Not yet. When you’re in PTSD, you stay in the right side of your brain. A month after we had lost our home, I did trauma therapy, to help me get back to the left side, which gives you context and narrative.

Before the fire I had begun a book about Sonoma Mountain, commissioned by Sonoma Mountain Preservation. This has been a rich artistic experience for me at this time. It covers geology, water, esoteric groups, human history, conservation history, all though the lens of personal experience. It includes a lot of work by other people. Its title is Where the World Begins: Sonoma Mountain Stories and Images, and it’s off to the printer soon. Also I am working on a Story Map for the Open Space District, about the history of fires.

How do you feel about the anniversary commemorations?

I find the anniversary is bringing my anxiety back. It may be art to create things from the detritus of the fire, but for me it is too much of a reminder.  I think I will go for another session of trauma therapy.

Did you recover anything from your home?

We dug through the rubble, but the only thing worth keeping was a brick that had been taken from Jill’s grandmother’s house in San Francisco, a house that burned in the fire after the 1906 earthquake. So that brick has been through the two worst disasters in Northern California history.

You’ve talked a lot about the importance of community.

I didn’t understand the term “social capital” before. So many people my wife Jill and I knew, or had connections with, or who knew about us, have come forward to help. Our home on Warm Springs Road burned down in the early morning of October 9. Three days later the Fosters, who lived down the road but we didn’t know well, called up with the offer of putting a trailer behind their house for us to live in. Then they put a smaller one for our son. And they’ve put a third one for someone else. We call it the “AOK Trailer Park.” These are such generous people.

Because we were homeowners who had insurance, we have a path. Renters don’t. I have lots of compassion for the renters. Of course there are lots of questions, like whether we will be able to afford to build anything like the size home we had. And whether we can get fire insurance on it. I know someone who just got title to a family home in Glen Ellen, but she can’t get fire insurance for the zip code. No wonder there are so many “for sale” signs on the road.

As an ecological historian, how do you see all this?

The hills have always gone through this cycle of fire and re-growth, even before humans. I always said I would never live in the Mayácamas because of the fire danger. But then the fire came down from there to my home. I should have known – that’s exactly what happened to the Springs in the 1923 fire. Then it went all the way to Grove and Arnold. That was like Coffey Park. After the 1964 fires, Fountain Grove area was deemed too hazardous for homes. But when the road went through, Santa Rosa forgot and let developers build. The land recovers, although probably more slowly because of the effect of humans. But the human cost is worse.  I have found lots of hope in the natural world. The wildflower displays rising out of charred ground this spring. And although we had to have 15 trees that couldn’t make it cut down, the big Valley Oak in our backyard, the tire swing tree, survived.

I’ve been thinking that maybe fires will recur more frequently. And for us in Glen Ellen, the possibility of losing the SDC is a looming second tragedy.            For a long time, walking on our half-acre, I just felt a sense of loss. But recently, since the gouge from over-excavation was filled in, it’s feeling pregnant. It has been healed. It’s at zero now. We plan to have an Airbnb room in the new home. Did you know that’s an old Glen Ellen tradition? Ever since the railroad came, people have been renting out a room to guests.

Silver linings from this experience?

First off, this fire separated the most important things from lesser ones. We have our lives, our memories. Sometimes I let myself “go home.” Go back in my head, going into the house, sitting down. We had a very comfortable home.  And we have a chance to re-set. To be thoughtful about what we want to acquire. I was a minimalist for a long time, but with family and children, that went. Now I have a chance again. I see this as another personal growth opportunity. A couple of years ago our son went through an extremely challenging situation, for him and for us. It’s all about having some perspective. That was like a 9 out of 10 on the scale of painful; our fire experience was more like 7 out of 10. And our son has turned out really well from that experience. That gives me faith that this will too.