Under the Sun: Libby Oberlin, teacher of theater

So, The Theater School is your own creation?

Yes. I wanted to work with students in my hometown, to teach and direct on my own terms, have my own curriculum, be my own boss.

How did you prepare for starting such a venture?

I got my BA from Hofstra in Theater, and later did a two-year Masters program in Educational Theater at NYU, which gave me a teaching credential in theater for kindergarten through high school. I taught theater to 9th graders in Brooklyn, and I worked in classrooms in Marin when we first moved out here.

The Theater School has just moved to the Community Center.

Yes. It was an exciting move. I am in partnership with Sonoma Arts Live. The School is still my baby – it is its own entity – but I have wonderful resources. We will share set pieces and costumes, and instead of performing in the black box at my former site, my students will be on the Rotary stage in Andrews Hall. It’s exciting to be at the Community Center, with so many artists around. 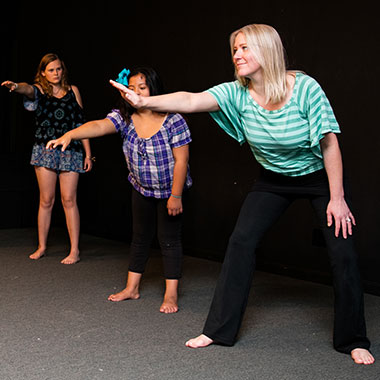 What do you like about working with young people in theater?

It’s busy, exciting, I’m always on my toes. I strive to bring out each student’s natural ability, to empower them with the confidence they need to step out of their comfort zone.

How do you keep everything under control?

At the start of a play, the students work with me to make their own rules, so that the school is always a safe place. That’s a necessity.  And I have an important ritual I always start the day with – a “check-in.” It’s something I learned when I worked with Shakespeare and Co. We sit down together and everyone is invited to say out loud anything that they need to say in order to be present at the class or rehearsal. It can be a simple as “I’m hungry” or “I’m really worried about a paper that’s due tomorrow.” They don’t elaborate – it’s just about saying it, so then they can focus. I use it with adults too. Before you create art together, you need to know what’s going on with the others.

What is the most challenging part of your work?

Managing so many different needs and personalities. I want to be sure that everyone feels heard, valued, important. Everyone has speaking parts. And I like ensemble. I choose shows that have everyone onstage as much as possible. 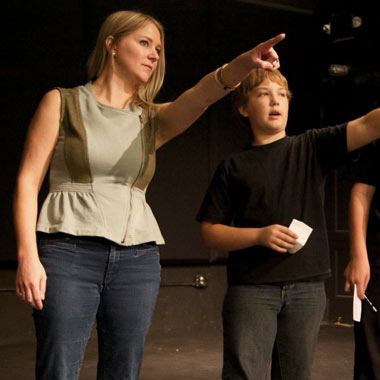 What do you do in your free time?

Free time?  What’s that? Theater people rarely have free time, and I’m a small business owner, so I do everything from handling the emails to sewing costumes. I do hire a choreographer and a stage manager. Theater is such a collaborative art form, so I surround myself with a capable, creative crew of excellent artists. But when I do get free time, I like to go out dancing with friends, see theater, go to movies, and basically do anything with my daughter.  She makes everything more fun.

Tell me about your family.

My husband Miller and I have been together for 13 years. We met in New York City when we were both younger and much cooler than we are now. We have an incredibly creative, artistic, and imaginative five-and-a-half year old daughter named Maeve. She has a flare for the dramatic. I wonder where she gets it from!

What brought you to Sonoma?

After living all over New York City, Harlem, Queens, and Brooklyn, we knew that we wanted to settle down somewhere and have a family. When we got married we moved from Bushwick, Brooklyn to Sonoma. It was a major adjustment from city living to wine country but we just fell in love with this beautiful small town. We love our little home in Boyes Hot Springs.

Did you always want to work in theater?

Absolutely. I fell in love with theater when I was seven, and was in a play on Nantucket.

Over the past year I’ve become very inspired by yoga.  I practice at Yoga Community and feel that it has enhanced my mind, body, and soul so deeply.

What are some memorable moments you’ve had in the Theater School?

Gosh, there are so many. Knowing you’ve made a difference in a child’s life. Having a parent tell me, “I’ve never seen that side of my daughter. I can’t believe what this has done for her.” That’s why the motto of the school is “Creating characters creates character.” And taking the bow after opening night. It’s incomparable.