Under the Sun: Lisa Summers, writer and poet 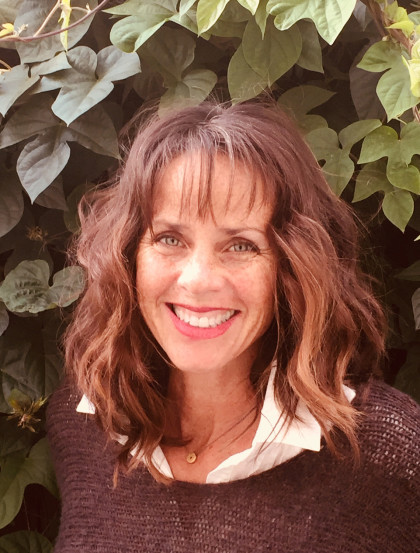 When did you start writing?

Not really till my late 30s. As a child I always wrote poetry. Poems inspired by the street culture of San Francisco – the jump rope rhymes, the Korean clapping games.  After college, I did lots of technical writing, working for an environmental mediation firm. Later I turned my science writing into storytelling, taking a job on the interpretive staff at the Academy of Science. But when I found myself at home with four kids I was inspired to get out of the house. So I took four semesters of screenwriting classes at College of Marin.

I graduated with a double major, in Environmental Policy and English Literature, from UC Santa Barbara. At College of Marin I was fortunate to take four semesters of painting with Chester Arnold. I received a Masters in Creative Writing from Sonoma State, and later I took creative writing classes with Sandy Hansher at College of Marin.

Tell me about your works.

“Star Thistle” is a collection of poems, and Ogygia is another. That one is an experimentation with form, informed by Homer and Dante. The title is the name of Calypso’s island, in “The Odyssey.” “The Vlkodlak” – that’s the name for a man cursed to wander the earth as both man and wolf until he learns his true nature – has a story about a Holocaust survivor and a Gulf War vet. Jorge Luis Borges is a big influence. My first novel, “The Green Tara,”  is a mystery that was being published serially in the Sun.

What genres do you write in?

Do you get your inspiration from people you know, from your own experience? In the notes to “The Green Tara” I made this disclaimer:  “Any resemblance to actual persons, living or dead, or actual events is purely tragic.” The natural world is a huge influence on my writing, as well as my painting. And the literary world.

Current projects?  A work I would call speculative fiction, “Clouds Over Chittor.” It’s about a woman who wakes up without her memories – kind of a futuristic amnesia plot.

I am more interested in creating a literary culture in my community than in advancing my career as a writer. Five years ago Daedalus Howell and I founded Sonoma Writers’ Workshop. We have poetry readings at Bump Cellars. You may have heard of the annual Halloween one, “Things that Go Bump in the Night.” Jonah Raskin is part of the workshop too.

Published works?  My very first was in the Sun! It was a story about a mother-daughter surf trip to Sayulita.  Some of my poems have appeared in literary journals, including Atlanta Review. And I had a couple of things published in the “Journal of Life Science,” one on what happens to Prozac in the watershed, and one on immortal microbes. But the published works I am most proud of are by the students in the Writing Center at Adele Harrison. Their poems were published in the Sun’s Creative Arts pages. “El Avispón” (Spanish for hornet, which is the school mascot) is a really amazing collection of stories, poems, essays and other writing by middle school students 2017-18. I designed and produced the 168-page volume. The best writers weren’t always the honor roll students, in fact, many were struggling to find a reason to be interested in school at all. I always tried to bring a sense of play to their writing. Many were ELD students. I encouraged them to use their own cultural markers, let them write in Spanglish when it “worked.” When they saw their stories published, they saw their work matters.

Are you working at the Writing Center this year?

Sadly, no. It is always disappointing when creativity is trumped by a credential – in this case, in mathematics and general ed – in an arts program. But I am excited to join Youth In Arts, an organization that has been providing programming in the arts in Marin public schools for fifty years, with instruction provided by trained working artists.