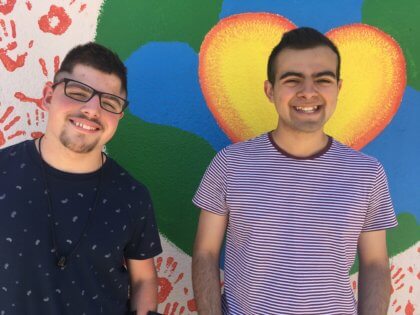 Congratulations to graduating seniors Creighton Rochlin and Sebastian Lopez, of the class of 2019.

Creighton Rochlin, at left, is described by SVHS teachers and staff as outgoing, friendly, mature, and humble. Having been teased because of a learning disability, in addition to a physical disability, Creighton values being kind to others. He describes himself as “smiling and happy” but also as an “old soul.” He’s also “old school,” he said, encouraging people to put down their phones and have real, substantive conversations. While not an overachiever, he said, he likes to set high standards for himself. He also started a Star Wars Club at the school. In the fall he is heading to Santa Rosa Junior College to study Political Science and History. His sixth grade teacher sparked his love of history, and that passion continued right through to SVHS where he thoroughly enjoyed his AP history classes. He enjoys the “deep critical thinking” involved, he said. He hopes to go into politics or law, to effect change – and history.

Sebastian Lopez, described as genuine, positive, open-minded, kind, supportive is “grateful they noticed me and recognized how hard I worked.” Like many teens, he had some challenging times in high school and had to work hard to overcome them and keep his grades up. Sophomore year he started a Volleyball Club, and joined the Empowerment Club, which promoted messages of kindness, love, and gratitude; it also became involved in larger social causes. For his Senior Project he coached the Adele Harrison Middle School dance team, and he was on the SVHS Dance Team. Senior year he was vice president of his class, and joined Leadership. He was the first student to become Chairman of the school’s Site Council, and was voted Prom King. A favorite phrase: be the change you want to see in the world. Sebastian is attending the JC in the fall, and will study sociology. He hopes to transfer to USC after two years.

The SVHS graduation ceremony will be held Friday, June 7, to begin at 6:30 p.m. at Arnold Field. Gates open at 5:30 p.m. The bleacher seating is open to everyone. There will be wheelchair/handicap seating on the west end of the parent section.