Demanding equity: When do we stand up? 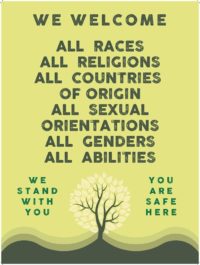 I moved to Sonoma Valley in 2001, a month after 9/11. I was called the N-word within three months. Store clerks asked for my ID, and I often got the infamous “Can I help you?” that is so familiar to people of color.  It means, “I don’t think you belong in this space.” American flags were everywhere, and aggressive pickup-truck drivers tailgated me, snarling from their windows. Law enforcement asked if I was local. I regretted leaving San Francisco. At that time, I felt like the valley was full of unwanted, negative attention. But this isn’t about me.

There is a lack of equity built into our beautiful Valley of the Moon. The west side of the unincorporated county is unable to vote in city elections, run for city council, or benefit from revenue for improvements and services. The 2014 groundbreaking study Portrait of Sonoma County examined disparities among neighborhoods along the lines of race, ethnicity, and gender. The results are among the lowest levels of life expectancy, education, and income, right here in our community. How can this be when the residents of Boyes Hot Springs and surrounding areas contribute so much labor and income to Sonoma Valley?

The answer lies in the painful history of land occupation and agricultural conquest which drew the lines that we have today. The founding and development of Sonoma Valley was built upon the destruction of the indigenous populations that flourished here, and the exploitation of Chinese laborers that largely built the first wineries but weren’t welcome as residents. The Bracero program of 1942 utilized Mexican workers without allowing them to become stakeholders either. It’s also well-documented history that much of Sonoma County supported the Confederacy, and many towns had official or unspoken sundown policies barring African Americans for decades.

So what does this have to do with an extremely successful poster campaign?  And why would I bring all of this up when we’ve had such an amazing outpouring of support for the LGBTQ+ community in response to the beliefs and political affiliations of wealthy developers?  As a human rights commissioner, I’m not here to be adversarial, but I’m here to tell the truth. I want to elevate voices that aren’t heard and bring light to what’s invisible. That often means I have to talk about things that aren’t comfortable.

Nobel prize-winning writer, activist, and Holocaust survivor Elie Wiesel tells us, “Neutrality helps the oppressor, never the victim. Silence encourages the tormentor, never the tormented.” In short, we must speak out against bigotry, racism, exploitation, and injustice all the time, every time.

In 2017, I tried to launch an inclusive poster campaign in the valley, but many businesses weren’t ready to speak out. By now, three years into the 45th presidential administration, many folks who remained silent before are finding their voices. For folks on the front lines, it is bittersweet. When we choose to speak out is a function of the level of privilege and comfort we enjoy within our society. Everyone just wants to live their lives in peace. But for so many, that isn’t possible because of who we are, and we’re forever asking others to join the struggle. It will take all of us to make this right.

Since 2017 we’ve had serious human rights issues in the valley. We had a racist hate crime in which a community organizer was targeted and brutally attacked, and the perpetrator was never found. I asked elected officials to make public statements about inclusion then, and stand strong on reinforcing values of protection and dignity for everyone in our community. I’m glad we’re doing this now; seeing the town come together to support the LGBTQ+ community reminds me of why I stayed here, and what’s possible when we truly see each other.

Let these posters be the beginning of discussions around real equity. Let’s make sure that LGBTQ+ youth who also live in the intersection of race and class feel safe enough to be out, proud, and visible. Let’s push back against forces that marginalize the folks that largely make this valley function. Let’s help hotel, restaurant and agricultural workers organize for better protections in an industry that is supported by healthy tourism dollars and local affluence. Let’s make sure all schools in the valley flourish with opportunity instead of struggling for basic supplies and services.

When the Sun reached out to me to cover the story of the posters, it would be easy to take a photo and congratulate ourselves. Don’t get me wrong. I am truly proud of what we’ve done, and now other cities in the county want to join our campaign. But since I’m just building on the work and resistance of people who started this work long before I came here, it’s my job to think about those who still need protection, who still need to feel welcomed, heard, and seen. It’s my job to listen and use my platform to amplify their voices. Let the welcome posters lead to more action, so that we all feel like we belong. I thank each and every one of you for joining me, and I’m asking us to go further. It’s time to stand up, together.

D’mitra Smith lives in Boyes Hot Springs and is the vice chair of the Sonoma County Commission on Human Rights.

11 thoughts on “Demanding equity: When do we stand up?”