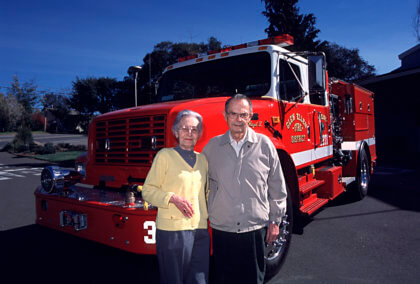 The Sonoma Land Trust has received a $700,000 grant from the Sonoma Valley Fund, the regional affiliate of the Community Foundation of Sonoma County, to acquire and protect more than 700 acres of open space, trails and natural resources at the site of the former Sonoma Developmental Center (SDC).

The money comes from a 2009 bequest to the Foundation from Hazel and Roland Todd (pictured).

According to John McCaull, land acquisition program manager for Sonoma Land Trust, “The legacy of protecting SDC’s open space land as a future park and wildlife corridor also honors its legacy of care for people with developmental disabilities. The Todds wanted their bequest to support priorities that linked human health and environmental protection, and that is what SDC has brought to Sonoma County for over 127 years.” 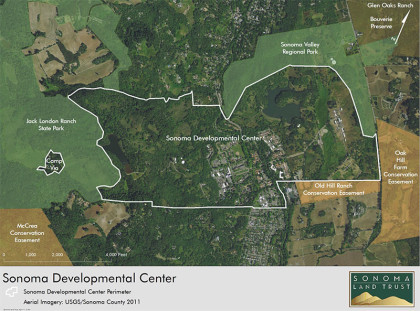 The donation will be used as a match for land acquisition and management costs in an effort to connect SDC’s open space with 9,000 acres of adjacent parks and protected lands.

Directing the Todd bequest to the preservation of SDC lands was in keeping with the family legacy, according to Elizabeth Brown, president and CEO of Community Foundation Sonoma. “The Todds’ Sonoma County roots ran incredibly deep. Roland Todd’s family had been in Kenwood since 1852, and the Valley was a unique and special place for both Roland and Hazel. We are so honored to continue to share their story, and we hope that the community will keep their memories alive and share in our gratitude when they visit this beautiful open space.”

In December 2018, the State of California closed SDC as a residential hospital for people with developmental disabilities. The 200-acre developed campus along Arnold Drive in Eldridge (just south of Glen Ellen) sits within a much larger — and wilder — 900+ acre landscape that stretches from the slopes of Sonoma Mountain to the Valley floor.

After nearly four years of negotiations over the future of SDC, local lawmakers delivered on their promise this year to craft a deal with the State of California for protection of the property’s open space and wildlife corridor lands, while also funding a reuse plan for the 200-acre developed campus.

The $43 million agreement, which was approved by the Sonoma County Board of Supervisors in April  and is included in the State’s FY 2019−2020 budge, funds basic upkeep of the campus and infrastructure for three years and provides $3.5 million to Sonoma County to create a specific plan for SDC pursuant to the County’s general plan.

While the County administers the specific planning and community engagement process, there is a parallel effort led by state and county park agencies to prepare for expanding Jack London State Historic Park and Sonoma Valley Regional Park to include SDC’s open space lands.

McCaull said funds from the Community Foundation grant will be used for the purchase of a conservation easement over portions of the SDC property, and to fund the rehabilitation, restoration and improvement of the property’s trails.

“All parties are working to make the transfer happen concurrently with the adoption of the County specific plan in late 2021,” he said.