Controversial since it was first proposed in 2012, Kenwood Investment’s downtown Hotel Project Sonoma has endured intense public scrutiny, undergone several design iterations and two major environmental studies, been halted by an appeal, and inspired a ballot measure regulating the size of new hotels within city limits. 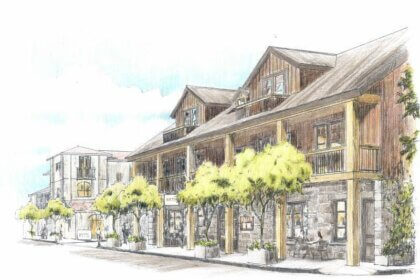 The saga may lurch to a convoluted close December 12 when Sonoma’s Planning Commission considers the project’s Environmental Impact Report, and the Use Permit needed to move the project into its construction phase.

A granting of the Use Permit hinges on the commission waiving zoning laws that call for housing as part of the development. Kenwood Investments has indicated that if that requirement is not waived by the city, the entire project will not be economically feasible.

The EIR is a revised report prepared for the development on West Napa Street in the Sonoma Index-Tribune Building. (Developer and lobbyist Darius Anderson is a principal in both Kenwood Investments and the media company that owns the Index-Tribune.) The project was put on hold two years ago when the City Council upheld a citizens appeal of the original EIR.

First proposed in 2012, Kenwood’s project has been controversial from its beginnings. A voter initiative in 2013 would have regulated the size of the hotel and all new hotels, limiting it to a maximum of 25 rooms. After a contentious campaign the initiative  was defeated by 124 votes, less than 1 percent of the votes cast. Since that time, the hotel proposal has undergone repeated revisions and modifications, but remains an application for a five-star, luxury hotel with 62 rooms, a public restaurant, spa, pool, and underground parking.

The requested waiver of the required housing component is looming as the County of Sonoma, Sonoma Valley, and the City of Sonoma are all in the midst of a housing crisis, a situation not viewed as severe when the project was first proposed in 2012.

According to the zoning requirements, commercial properties larger than one-half acre must devote 50 percent of that development to housing — unless that requirement is waived by the Planning Commission (and the City Council, if appealed).

The absence of a sufficient project alternative — one that incorporated the required housing element — was the basis of the successful appeal in 2017. But the revisions incorporated into the Final EIR, the one to be considered on December 12, do not include substantially more detail about including housing than the 2017 document.

The Final EIR reflects the use of a different methodology for the calculation of greenhouse gas emissions (GHG), which also was discussed during the 2017 appeal. Previously, the GHG calculations were based on “Trip Generation;” the newer calculations use a “Vehicle Miles Travelled” (VMT) methodology, which will be the required methodology beginning in mid-2020. The VMT approach in this revised EIR, however, only considers miles travelled within the destination area, not the miles travelled to get to the destination via airline or long-distance travel. It is precisely this approach which was successfully challenged by California River Watch in its lawsuit against Sonoma County’s Climate Action Plan, and a legal challenge to the VMT calculations may yet arise.

A proposed modification of the pedestrian crossing at First Street West and West Napa Street by creating curb “bulb-outs” to improve safety may also prove to be controversial, given the historic nature of the Sonoma Plaza area. No plans for the creation of a left-turn lane into the hotel’s entrance are currently being considered.

Whatever the decision of the Planning Commission, an appeal to the City Council is expected. Council members will have to balance the revenue potential of the proposed hotel against the need for housing, as well as the other impacts of the project. Even if the City Council approves the application, the ultimate outcome may be determined through court litigation.