Catherine Sevenau is a local writer, humorist, and storyteller. Her newly completed third book, "Through Any Given Door," a Family Memoir, is available as a free web series at Sevenaus.com. Catherine, also a longtime Realtor and Owner/Broker at CENTURY 21 Wine Country. [email protected]

Posted on February 27, 2020 by Catherine Sevenau

1950s San Francisco… On Haight and Belvedere, tightly wedged between my father’s dime store and the Superba Market, was Sweeney’s candy shop. The Sweeneys were a sweet white-haired couple who lived in the flat above their Haight Street store. Actually, now that I think about it, Mr. Sweeney was on the crusty side, a balding barrel-chested man with these wild eyebrows; he always wore a white but rather grungy half-length lab-coat style jacket. His wife was short, wore wire hexagonal glasses and a white apron, and called me “dear.”

The store, once an old soda fountain, still sold milk shakes and ice cream. When it was hot, which was seldom during the summer in San Francisco, Dad and I’d pop in for a single chocolate cone or a cold orange soda pop after having lunch at the Glen Ellen Diner across the street or at the Russian restaurant down near the Panhandle.

Sweeney’s was a dingy narrow establishment with rows of begrimed glass cases filled with penny candy. The long candy counter was to the left, and to the right were perpendicular tables loaded with kites, PeeChee folders, and wrapping paper. As you stepped through the front door a swirl of stale vanilla, banana taffy, musty cocoa, and a hint of mice wafted up your nostrils. 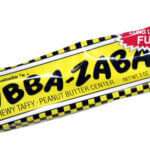 You were greeted by gumballs and gumdrops in tumbled mounds, by lollipops standing quietly waiting to be adopted, by elbowing jumbles of jelly-beans and jujubes hoping to be chosen instead. The chewy Abba-Zabas and Sugar Daddys begged for attention while the Tootsie Pops were shy, their scarves wrapped tightly around their long skinny necks. The caramels joked around with the strawberry taffy and the bubblegum teased the jawbreakers. And whenever Mr. Sweeney turned his back, the red wax-lips flirted shamelessly with the candy cigarettes.

Aloof at the end of the counter were the bins of stale cherry, raspberry, and coconut bonbons, thinking they were something else, having no idea that they smelled or tasted nothing like the buttery velvet of See’s. The pedestrian Mallo Bars jealously jousted with Peppermint Patties dressed in their elegant silver jackets, while the button candies stood in polite lines on paper strips, glad not to be part of the fray. The worldly licorice whips slumped side-by-side, naked and bored by the whole thing.

The black licorice never called to me, nor did the Fireballs, but the Pixy Stix did, doing the Hokey Pokey in their tall glass jar and frantically waving their folded ends, aflame with hope, shouting: PICK ME! PICK ME! They leaped into my pocket as I flipped my nickel heads or tails and clinked it on the glass countertop.

In the 1950s, a nickel bought a kid a small brown paper bag of their heart’s desire from a penny candy store.

Catherine Sevenau is a local writer, humorist, and storyteller. She is currently working on her history and genealogy, which, along with her third book, Through Any Given Door, a Family Memoir, is available as a web series at Sevenau.com. A longtime Realtor and Owner/Broker at CENTURY 21 Wine Country, [email protected]

One thought on “Sweeney’s Penny Candy”