Posted on August 1, 2020 by Catherine Sevenau 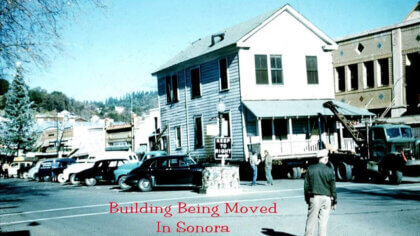 My father first took a job managing the Sprouse-Reitz on Washington Street in Sonora. Mom came in and helped out. Ten years younger, with jet-black hair like her mother’s and grandmother’s, she wore red lipstick and a wide smile. She was courteous, friendly, and chatty with the regulars. Dad was the boss, good to his employees and pleasant with the customers. Detailed, he was particular how the merchandise was displayed and fastidious about keeping the store clean; no half-empty bins, no messy shelves, no litter on the floor. Under his management it doubled in size, taking over the business space next door, expanding the sales crew to ten.

Returning from his daily trek to the post office, he stopped in at Elsbree’s Cigar Store. He sat at the long mahogany bar and visited for ten minutes with Mr. Elsbree, watching reflections in the French imported plate glass mirror and sipping a room temperature orange Nehi. Dad thought if you drank cold drinks on a hot day you just got hotter.

My brother and sisters spent lots of time in Elsbree’s, mostly reading the comic books on the shelves, especially winter days when it was too wet to play outside and summer days when it was too hot to be alive. Some Sonora summers got so hot that Claudia got nosebleeds and passed out in the bin. Mr. Elsbree would call Dad and Dad would leave work to carry her home. She always got in trouble for it. She wasn’t supposed to be in there reading the comic books, then for bleeding all over the place.

Dad ran his register six days a week, walking the block to work in his brimmed felt hat, three-piece suit, his muscles hidden under long-sleeved starched white shirts, muscles from working on the family farm, from construction and work on the highways, and from years of delivering ice. A businessman now, he was finished breaking his back as a laborer outside in freezing snow and blistering sun. He hated that kind of work, hated that kind of weather. That’s why he left home in the first place, that, and his mother constantly telling him what to do.

Our family lived at 104 Green Street in the old Lepape house now owned by the Segerstroms (who also owned the Sonora Inn and Kelley’s Central Motors and Garage), a white two-story residence right in the center of town that rented for $35 a month, and where I would be born in five years. The house was behind the Inn and Kelley’s. The upstairs had four bedrooms: our parents’ room faced the front, along with a bathroom with a claw-foot tub. The kids’ rooms were toward the back, the smallest the only upper room with heat. It was so cold during the winter the girls dressed by the downstairs oil heater so they wouldn’t freeze to death.

Small brown bats nested in the walls of my sisters’ bedroom. Dad cut holes in the wall to get at them, then chased them around the room with a stick until he killed them (the bats, not my sisters), throwing their furry bodies out the window and plugging the holes. With their high-pitched chi, chi, chi, the bats looked big and scary flying around the bedroom, but when dead on the ground below they looked like poor small mice.

One thought on “Chapter 3: Warm soda on a hot day ”